For many years the area around Carnew in South County Wicklow was dominated by the Wentworth-Fitzwilliams who were Lords who owned the Coolattin Estate near Shillelagh. The fourth Earl was Lord Lieutenant of Ireland for just three months in 1795. The last earl died in 1979 and the title lapsed. The eight earl is pictured below (left) with my Grandfather PJ O'Loughlin - we think the photo was taken at a Hunt Ball in Coolattin in 1946 or 1947: 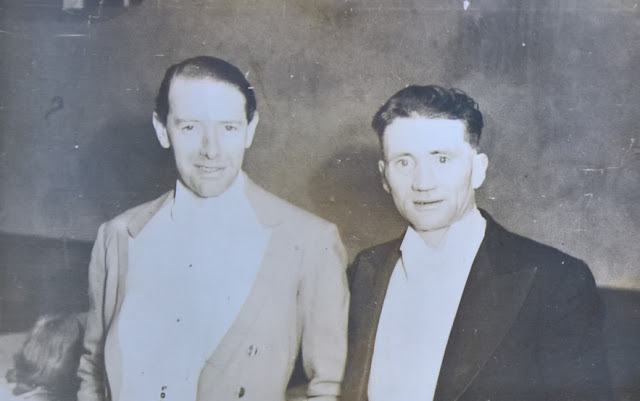 Peter Fitzwilliam was killed in an air crash flying from Paris to Cannes in a storm on May 13, 1848. The plane he was in was a ten seater de Havilland Dove, all four on board were killed when it crashed near the village of Saint-Bauzile in the South of France. In addition to Fitzwilliam and the two crew who were killed, the fourth person on the plane was none other than Catherine "Kick" Kennedy - sister of President John F. Kennedy. It is believed that they were having an affair and that they planned to marry. He was seeking a divorce at the time. Rose Kennedy disapproved of their relationship because he was married and a Protestant, and reputedly skipped a memorial service for her to have routine tests done in a hospital. Her devastated father Joe was the only family member to attend her funeral.

Kennedy was just 28 when she died, Fitzwilliam was 37. Her first husband was killed in the Second World War in 1944 after they were married for just four months. Her brother Joe Jr had been killed a month earlier. This was all before Jack and Bobby were assassinated in the 1960s. The Kennedy's had their fair share of tragedy, and Kick is often considered the forgotten Kennedy.

So, I am connected to the Kennedy's through the photo above!