During my last two years as a Lecturer in the National College of Ireland I taught the module "Programming for Big Data" to students studying Data Analytics. I developed all my own scripts, course notes, R code, and sample data files - so I had built up quite a resource of R education material. I should point out that the R Cookbook (Long & Teetor, 2019) provided lots of inspiration and ideas for code. I am now launching a new series of YouTube videos based on my former module resources. I am also experimenting with YouTube's Premiere tool to announce the series at 16:00 tomorrow. I am also releasing the first five videos at this time, and hope to be able to chat to viewers after the launch.
All my R videos are short, mostly around 6-8 minutes long. Over the next few weeks I will release videos on a regular basis. At the time of writing this post, I have over 50 videos ready to go, but with a lot more planned.
While I have numbered the videos in sequence, it is not my intention to create a course in R programming - there are lots of free and paid for sites doing this. In fact, there is a lot of competition on-line for R education material. I have only modest hopes that my series will be successful. 99% of the people who watch my existing videos find them through a search for that particular topic. I expect the same for R videos.
Finally, I am making all my R code scripts, plus supporting files, available on my Github, where learners can view and download to try out - see https://github.com/eoloughlin/How-To-R.

Just how many people are there by age group in Ireland?

Many people in Ireland and all over the world are anxiously waiting their turn to receive the Covid-19 vaccine. In Ireland we have 15 groups in our HSE priority list for the vaccine. As a 61 year old, I fall into the 12th group ("People aged 55-64"). There are no dates yet for when this group will receive the vaccine. The list is based (fairly in most people's view) on vulnerability and age. This got me thinking about how many people there are in different age groups in Ireland.

The Central Statistics Office provides Census data for 2016 - the most recent available. The population of Ireland in this census was 4,761,845, and data is provided by five year age groups. Using Excel I plotted these data in a bar chart. 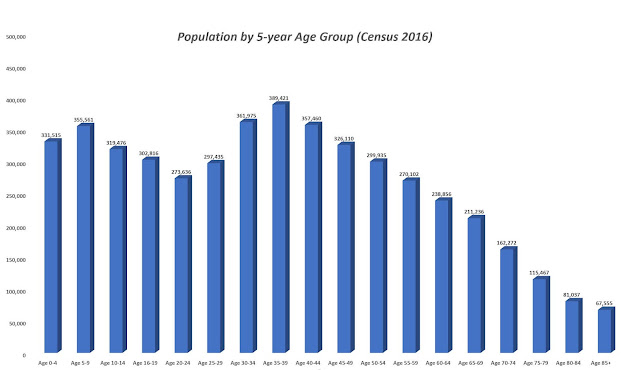 First, I was struck that the age ranges were not evenly balanced. The highest age group are in the 35 to 39 age range, while the lowest is the over 85s. In my own age group (60-64), I am one of 238,856 people. To vaccinate everyone over 65 (priority #5 on the HSE list) means that 570,012 will get the vaccine ahead of the rest of us. According to the 2016 census, there are only 67,555 people over the age of 85 (which includes my Mum and Dad) - this should now be an easy and quick group to vaccinate. If you are in the last group ("People aged under 18 and pregnant women", #15 on HSE list), then there are approximately 3.5 million people ahead of you in the vaccine queue.

Launching: "How To... Programme in R" #data #analytics #youtube

YouTube allows Content Creators to launch a video or series of videos with YouTube Premiere. I'm trying this out for the first time as I will be releasing a new series of videos on How To Programme in R starting on 1st February next. Over the past couple of months I have been spending Lockdown recording lots of short videos using content from my old class notes and exercises. Most videos are between 5 and 10 minutes long, and each has just one learning objective - I have 50 ready so far, with lots more to come. My plan is to release videos one-at-a-time on a daily/weekly basis after 1st February.
I don't know if a YouTube Premiere will do anything to get more viewers to my channel. There is a lot of competition on YouTube, but I'm hoping that my step-by-step learn one thing at a time approach will work. While I'm guessing that YouTube Premiere is aimed more at celebrities and influencers, I'm going to give it a go anyway. Part of this Premiere process is that the video below will not be released until 1st February - this is intended to generate enthusiasm and anticipation.
Please share!
No comments:

Resisting Temptation to go back Lecturing

Recently, I turned down the opportunity to lecture some modules this coming semester at a College that I had not worked with before. I was flattered, but also very honoured to be asked. The modules did not quite suit me so it was an easy decision to say "no". Even if it was just a little bit - I was slightly tempted to give it a go.

Given that many of the things I had planned to do during retirement will not be possible for the next few months, it might have been a good use of my time to take on a module or two. I had said "no" to joining the Associate Faculty of part-time lecturers in my old College as I did not want to be tied down during a 12 week semester. I wanted the freedom to come and go as I please, and having classes every week would interfere with this.

I'm wondering how many others who have retired during the Pandemic feel a little cheated and feel they might be better of back at work? Us retirees are all looking for things to do. I am recording a lot of videos for YouTube release and spending time building up my family tree. I'm also watching a lot of Netflix!

I don't see myself going back to part-time teaching. Hopefully we will all be vaccinated before the end of the summer, and my retirement can really begin!

In August 2019 I received the following Channel Violation message on my YouTube Channel:

Eugene O'Loughlin, your content violated YouTube's Community Guidelines and has been removed

The video was about how to download videos from YouTube using Mozilla Firefox - originally published on 23 October 2013. At the time I was genuinly shocked that I had allegedly violated some rule and I was very surprised that it took five years for this happen. I appealed the decison, but was rejected. It turned out that I was guilty of posting content that encouraged other users to violate YouTube's Terms of Service. Towards the end of the video I stated that downloading a video was a good way to avoid ads. Guilty m'lord!

The Channel Violation message is still located at the top of my Channel page. Before the video was taken down it had amassed 89,918 views, 177 Likes, and 15 Dislikes. I checked today if there are any other videos that show how to do the same thing, and there are hundreds. So I have decided to re-record without the "encouraging other users" message (I did this last year), and upload again. Fingers crossed that I have not violated any further rules as this would be my second strike - YouTube operates on a "three strikes and your out rule".

Over the past few months I have had the time to do a lot of research into my family tree, and one of the more interesting ancestors that I have is Fr Theophilus Murphy. When I was growing up, there were many mentions of a "Fr Theophilus" and "Rhodesia". I have vague memories of him calling to our house in Ballingate.

Edmond Murphy was born in 1928 and grew up in Newmarket, Co Cork. He was my Grandfather PJ O'Loughlin's first cousin, making him my first cousin twice removed. When he joined the Franciscans in 1946 he took the name Theophilus. He was ordained a priest on 23rd May, 1954 and within a few of months was on his way to the Missions in Northern Rhodesia (modern day Zambia). His brother Patrick (Fr Hugh) was already a missionary in N. Rhodesia. He was just 26 years old, and he would spend the next 52 years in Africa.
In those days, Franciscans were only allowed home every eight years. So, it would have been 1962 at the earliest that he could come back to Ireland, and visit our house. It happened that the previous Christmas that my grandfather presented our house with a picture of the Sacred Heart, which still hangs in the kitchen in Ballingate to this day. At the bottom of the picture is a dedication to the Sacred Heart to my parents Phil and Joe, plus myself, my brother Joe, and sister Kathleen (my youngest brother Brian was born after 1962). Though very faded, you can make out the signature of Fr Theophilus Murphy. A nice, if distant, connection with my cousin.
Fr Theophilus served in many locations in Zambia, and also served three terms as Religious Superior, responsible for the lives and welfare of the friars in Zambia. His postings in Zambia were as follows:
Sichili 1955 to 1961
Mangango 1962 to 1968
Lukulu 1968 to 1973
Lourdes parish in Mongu: 6 months in 1978,
Nalionwa (Kalabo): 2 months in 1978;
Mangango, most of 1979
Senanga 1980 to 1983
Malengwa 1985 to 1988
Sioma for 6 months in 1989
Malengwa for 1990
Mangango 2000 to 2006
Fr Theophilus retired in 2006 to the Holy Trinity Friary in Cork, but sadly died suddenly later that year (7th Oct) while preparing for Mass. I would love to have met him and hear about his times in Zambia. Today's generations will soon forget that Theophilus and many young Irish men and women became missionaries all around the world.
No comments: