Last January I bought an VW Electric Vehicle, leaving the petrol world behind. I had no particular reason to go electric, I was very happy with my one-litre petrol car which was very economical (about 5 litres per 100km). But I just decided that I wanted "in" on the electric revolution now rather than wait several more years when the price difference between ICE (Internal Combustion Engine) cars and electric cars would be minimal. Also - range anxiety is real, but waiting for batteries that have longer ranges is a bit like waiting for the next generation of computers. there will always be a faster one next year!

My car's official maximum range is 505 kilometres as specified by the Worldwide Harmonised Light Vehicle Test Procedure (WLTP). The advice from the manufacturer is to charge to 80%, so if I adhere to this - the range drops to 404 kilometres. In colder weather, I never get this - the effective range is no more than 350 kilometres. This is plenty for normal driving.

I stopped using public chargers two months ago. South Dublin is not well served with public chargers, and I often found myself finding the charger spaces already occupied. There is a lot of waiting for chargers, and then a 45 minute wait while the car charges. I used the so-called "Granny Cable" for slow and overnight trickle charging instead. However, yesterday I got Electric Ireland to finally install a Home Charger - this will be my main charge point from now on using night rate electricity. I've yet to work it out, but I 'm guessing I will be able to get a charge up to 80% for around €6. 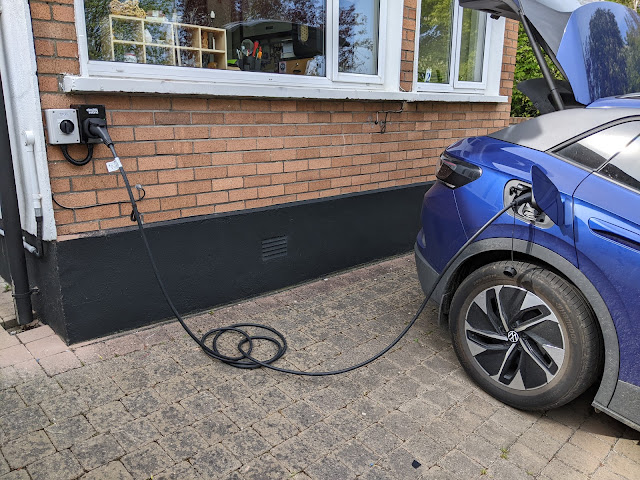 Only three months into EV driving, and there is no going back to petrol/diesel for me. I love EV cars!

When I first had the Ancestry DNA test done it indicated that I was of 100% Irish ethnicity - this was no real surprise as I found no non-Irish ancestors going back four generations to the late 1700s in my family tree. Most of my DNA matches with the Munster area - particularly North Cork where all my father's family were from. The Ancestry web site is constantly updating as more and more people do the DNA test and upload their results. It's good fun seeing a map of the world with where your 4th - 8th cousins live.

Today I had another look and was surprised to find that I am no longer 100% Irish! Ancestry tells me that I am 3% Welsh, though does not record anyone in Wales today who is even remotely related to me. Somewhere in my background there is Welsh blood - I wonder will I be able to find it?

A few weeks ago I visited the Loreto Convent in Bray, Co Wicklow - it is about to close and I wanted to see the grave of my Grand Aunt Sr Brigid Hurley (known to the family as Mother Brigid). We used to visit her in Bray on many occasions, and I have fond memories of tea and cakes in the Visitor's Parlour.

Hannah Mary Hurley was born in Newmarket, Co Cork on 26th August, 1898. She was the third oldest in a family of six. She entered the novitiate at Loreto Abbey Rathfarnham on 1st September 1920, and was professed there on 28th May 1929. She was known in religion as Sr. Brigid. She obtained a B.A. from UCD in 1926, a Higher Diploma in Education from UCD in 1927, and in 1924 had passed the Cours Moyen, Certificat from the Alliance Franciase, Paris. Throughout her religious life, Sr. Brigid ministered as a teacher (teaching Religious Education, Irish, French and English), held various administrative offices including Superior, Assistant Superior, Consultress (advisor to Superior), Procurator (house bursar) Mistress of House, and Infirmarian. 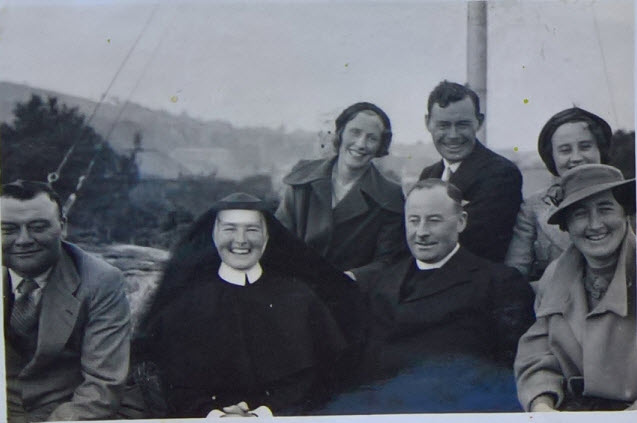 Sr. Brigid was resident in and ministered in the following communities*:

According to the Loreto Archives, "Mobility for mission was, and is, a key feature of the lives of IBVM Sisters. Transfer between communities and ministries usually occurred each August, in time for the start of the next academic year.". Sr Brigid certainly got around! 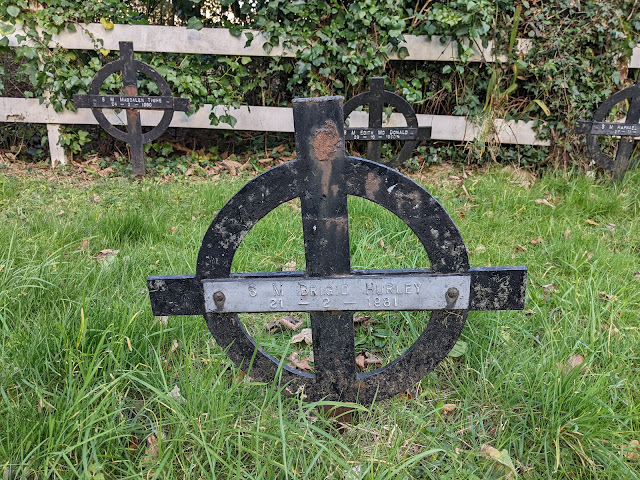 Mother Brigid died on 21st February, 1981. This was a sad time for the family as less than a month earlier her beloved sister Eileen had also died. She is buried in a small cemetery along with over 100 other Sisters overlooking Bray. The Convent and adjoining lands are to be sold by the Loreto Order - most probably the land and house will be developed for housing and apartments. Hopefully the cemetery will not be moved. I don't recall attending Mother Brigid's funeral - I was in Trinity at the time and should have been able to attend.