Recently, I received a copy of "The Handy-Volume Shakspeare" series from my Mum who told me that it belonged to her grandfather Richard Cullen. Of the original 13 volumes, this set comprises nine volumes, #VIII, #IX, #X, and #XI are missing. The set is not of any value - many copies are on sale on line for less than €20. Their condition is not great, further reducing value as a set.

There is no publication date on any of the books, though I believe they were are from the 1880s. Note the spelling of "Shakspeare" - this was a common spelling of the Bard's name in the 19th century.

An interesting feature of this set is that inside the front cover there is a sticker with the name "Wilson" and a family crest. On the first page there is a very neat signature for "HORACE WILSON". I asked my Mum if this name rings a bell, but she has no memory of the name in the family. It is therefore likely that my great-grandfather bought this in a second hand book shop in Dublin.
I was never really a fan of Shakespeare's work. In secondary school I studied Julius Caesar, As You Like It, The Tempest, King Lear, and Coriolanus. I once attended a performance of King Lear in the Globe Theatre in Stratford-Upon-Avon - I don't believe I have ever seen a performance of Macbeth or Hamlet.
I'll keep these little books as a memento of my great-grandfather. I am unlikely to read them, though I do open up random pages to see if any famous quotes stand out. I've put a post-it note inside the cover of volume I, so that whoever ends up with these books after me will know where they came from.

Today I had my (probable) last day as a Volunteer at the Aviva Mass Vaccination Centre. For five months I have been giving a hand as a Volunteer Steward, it has dominated my summer. The Aviva MVC is closing for two weeks (to allow for World Cup Qualifier games) - when it re-opens on Sept 11th, I may not be able to participate as I will be on holidays.

What a five months it has been - I had no idea back at the beginning of March that I would still be involved. I have met so many wonderful people and been part of "one of the best teams" to play at the Aviva (Martina Queally, Chief Officer for Community Healthcare East). We had a send-off and photo call to mark the end of this phase of the vaccination programme. I got an opportunity to sneak onto the edge of the pitch for a photo, and I had my 26-year old Ireland jersey on to mark the occasion. 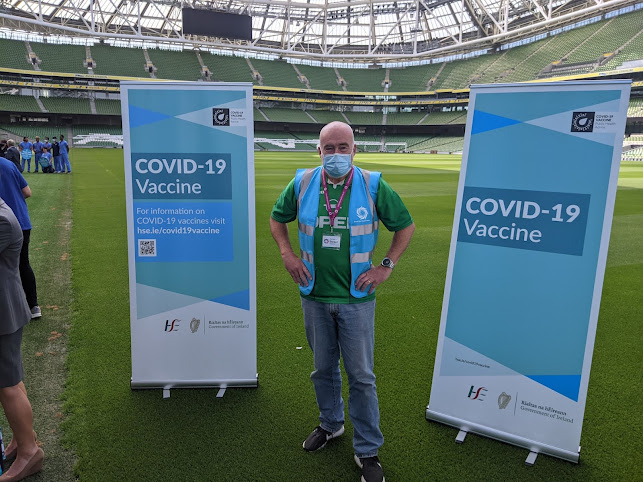 Thank you to all my fellow Volunteers for the welcome they gave me and for being a real joy to work with. The Clinical, Administration, Housekeeping, and Security teams also gave us great support - we backed each other up all the way through. I will miss taking part in this very historic occasion. I hadn't done much volunteering before - but now I have the taste for it, and the time, I hope to help out some more.

One of my most popular videos over the past six years has been How To... Perform Simple Linear Regression by Hand. It has recently become the third of my videos to surpass a million views. Since it was first published on 23rd December 2015, it has also got 505 comments (mostly very positive), and 9,442 Likes (a 96,7% positive rating). This video has also gained me 4,400 subscribers and earned just over €2,000. Most viewers (78%) are in the 18 - 24 age group indicating that most viewers are students. The top viewing countries are the United States (21%), and India (19%). Just 1,941 (0.2%) of views are from Ireland - less than Zimbabwe and Nepal!

Interestingly, despite the video being 10:55 minutes long, the average viewing time is just 2:46 minutes. By 13 seconds into the video, 40% of viewers have already stopped watching. I introduce all my videos in the same way, but even though I am concise and to the point, there is still a large drop off. Only 12% watch the video until the end.

It is gratifying and humbling to find that a video, which took me less than eleven minutes to make, has been useful to so many people. Getting a "hit" is so difficult - none of my top 20 viewed videos was published in the last five years. It is difficult to build an audience.