All Quiet on the Blogging Front

It's been over a week since my last blog post and I hardly noticed the time going by. I don't know the last time I left it this long without blogging about anything - my last post was on St Patrick's Day and it was only my fifth post of March. I am heading for my lowest number of monthly postings since I started this blog in 2006.

So what's going on?

Not much really. I am spending quite a bit of my spare time writing my second travel book: "Exploring Northern Ireland's Causeway and Mourne Coastal Routes" - I am about 70% complete. I recently lost a lot of work due to syncing problems with OneDrive and it was much more difficult than I thought it would be to re-write the section that I lost. I think I am also suffering from writer's block! I have also been preparing a quiz for a Killiney Lion's Club fundraiser - 100 questions takes a long time to write (and check for the correct answers).

I have not commented much recently on educational matters. I was listed to speak at the DCU Dublin Summit (featuring Google for Education) last week, but had to withdraw. Following on from missing the Irish YouTube Creators Day at the end of February, it has certainly been an exciting time in education that I have missed.

I also have to admit that sometimes I now forget about my blog - up to recent times I would have been thinking almost every day about what I should post about next. Anyway - following this brief "holiday" I hope to get back to normal ranting and raving soon!
No comments:

St Patrick's Day - What does it mean to be Irish? #StPatricksDay

At 7.30 this morning three drunks passed by our house on the other side of the street. One was vomiting very loudly in between telling his two mates "I'm so sick". I guess he won't be the first Irish person to get sick today! Taoiseach Enda Kenny rejects the "stage Irish" image that people abroad have of us that Irish culture is synonymous with alcohol. He has rejected Australian Prime Minister Tony Abbott's awkward message to Irish people in which he describes St Patrick's Day as the one day when "it's good to be green". Here's Mr Abbott's message - judge for yourself:


I like being Irish. I was born and reared in Ireland. I've lived and worked in Ireland all my life. I will die in Ireland. I have never ever been ashamed of being Irish. I am a proud Irish man, and today is our National Day. I had a great giggle at Jennifer O'Connell's article in Monday's Irish Times on 37 signs that you might be Irish. In particular I loved these ones:

Review: The Book of Mormon

On Saturday last Roma and I went to see "The Book of Mormon" at the Prince of Wales Theatre in London (it was a Christmas present to ourselves!). I've seen some brilliant musicals in my time but this was by far the most enjoyable!

The music is great, the acting was very strong, the singing was fantastic, and the humour was amazing. It is a bit of a piss-take on the Church of the Latter Day Saints, but I felt it slagged off religion in general. There's no way that a musical like this could be done for all religions - I remember the controversies when Jesus Christ Superstar first came out - it is very tame compared to the BoM. Don't go to this if you are easily offended by bad language and blasphemy. This is satire at its best.

Below is is the opening number "Hello" as performed at the Tony Awards - enjoy!

Keeping Pace with the Changing Face of Online Learning via @OLCToday

The Online Learning Consortium has just published a smashing new infographic about the changing face of on-line learning. Third level colleges are now offering more affordable degrees on-line than ever before and it has become much easier for students to study as broadband penetrates further into the learning sphere. Does this spell the death-knell of classroom based colleges? Not yet in my view, but it is coming and our Colleges need to be ready for it. Recent media reports point to our growing population and the pressure it is causing on primary and secondary education provision. Inevitably this will reach our Colleges in a few years and we have to be ready for it. Short-sighted and short-term strategies at individual college level is not enough in my view - the Department of Education and the Higher Education Authority need to be the drivers of this change. As the world gets smaller, on-line education providers like Udacity are offering on-line degrees that will some day replace our existing college degree. Someday employers will compare a Computer Science degree from Udacity with Trinity or DCU and think - there's no difference!

Jobs? Am I a turkey voting for Christmas? Doesn't supporting on-line education mean that us Lecturers will all lose  our jobs? This was a question asked of me back in 1989 when I joined the then CBT Systems (now SkillSoft) - computer-based training (CBT) was going to take over the world! Well - it hasn't happened yet.

The Online Learning Consortium contains lots of interesting points about the future of learning, and here's what it says about what the future holds for "New Types of Educators":


No mention of a lecture!

Education is changing rapidly - according to the infographic "Jet Blue and Virgin America are offering in-flight video college lectures from Coursera and the Great Courses series allowing continued learning even in the air". Never did I think that a student of mine could be learning on a cheap flight!

My fear is that each Higher Education Institution in Ireland will go ahead and do their own thing (as most seem to do now for classroom-based courses, albeit under the QQI standards) - this doesn't make sense. Why not have one central degree per subject (eg Computer Science) delivered on-line by top educators available to anyone - rather than 40 odd different programmes from 40 odd different institutions? Joined up thinking required!
No comments:

Book Review: "The Church of Saint John the Baptist" by Michael O'Connell

I'm not the holiest Joe on the planet, but I do take part in the church choir at St John the Baptist church in Blackrock on Sunday mornings. I'm don't even live in the Blackrock parish, I live in the nearby Guardian Angel's Parish. Nevertheless I enjoy singing in the choir. Whether it will get me into heaven or not is another thing. 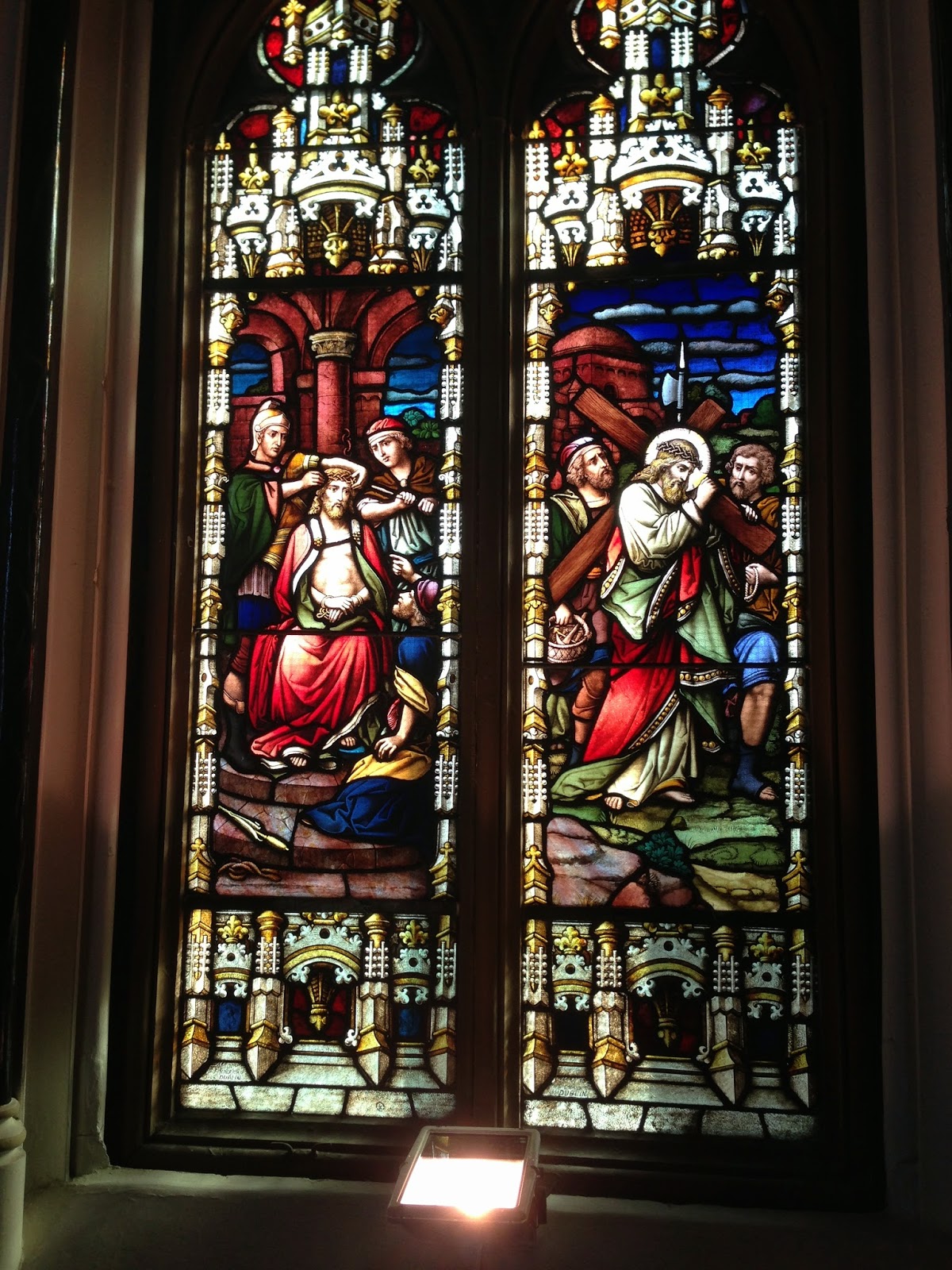 Each Sunday I sit in the balcony beside a Harry Clark Studio stained glass window depicting the crowning of the thorns on Christ, and his carrying of the cross to Calvary. Regardless of your religious beliefs (or none) - it is a beautifully painted window. This morning the sun was shining bright so I couldn't resist the photo to the right (before Mass started).


A few Sundays ago I purchased a copy of Michael O'Connell's new book about the history of church. It is an interesting read for anyone interested in the history of Blackrock as it chronicles the development of the church from when it was first blessed and dedicated in 1845. Lord Cloncurry donated the site and much funds to the development of the church in an era when Catholic Emancipation initiated a building boom in churches all over Ireland. It was also a time of Father Mathew's Temperance movement, and O'Connell tells us that an estimated 15,000 people attended a pledging ceremony after the dedication mass in a nearby field (he doesn't say that all 15,000 took the pledge!).


The book documents several of the stories behind the windows, altars, and statues in the church. Perhaps one of the most interesting items is a brass plate on one of the church pews dedicated (in Irish) to Paddy Moran who was hanged in Mountjoy Prison on 14th March 1921 (here is his Wikipedia entry). Moran was convicted of the murder of a British intelligence agent on Bloody Sunday (21st November 1920), despite the fact that he was at Mass in Blackrock at the time of the murder. He was one of the "Forgotten Ten" who were re-interred in a State funeral in 2001 (Kevin Barry was the best known of these ten men). Over 40,000 people prayed outside the prison on the morning that Moran and five others IRA were hanged.


With declining congregations, churches all over Ireland will reverse the expansive trends of the 19th century. I see Catholic parishes and churches merging with each other, even closing, over the next few years. Michael O'Connell's history of St John the Baptist church ensures that it will not be forgotten in years to come.
No comments:

Since taking over the Business Data Analysis (Statistics) module a few years ago at the College I have been endeavouring to improve the module content and cover more tests. Many statistical tests assume that populations are normally distributed and that variances are equal. Student's t-test for comparing the means of two samples uses a slightly different formula, and a completely different way of determining degrees of freedom, depending on if the variances of the two samples are considered equal or unequal.

Fortunately the test for Equality of Variance is an easy one - it is called the F test. Simply divide the higher sample variance by the lower sample variance - this gives an F statistic which can be compared to a critical value for F in an F Distribution statistical table. From this you can determine the appropriate t-test formula to use.

Here is my latest YouTube video showing how to carry out the F test, both manually and using Excel's Data Analysis Toolpak: