On this day 100 years ago, 26th January 1922, Daniel Murphy Jr was born in Chicago. His father, also Daniel, had emigrated from Lisrobin in Co Cork arriving in Ellis Island, New York, on 5th July 1907, and settled in Chicago. His wife, Elsie Riedinger, was a native of Chicago - they were married on 8th November 1916. Daniel Junior was one of their 10 children - he was the only boy.

Daniel Murphy Jr is a distant relative of mine - we are 1st cousins, but twice removed. In other words, he is my grandfather PJ O'Loughlin's 1st cousin. PJ's mother (Julia) and Daniel's father were sister and brother. He features in a lot of family trees online*, so there is quite a bit of information about him. He was married on 24th September 1943 just before he set off for war in the Pacific. In the photo below Daniel is seventh from the left on the second row from the back. He has his arms around a young woman who presumably was his sweetheart (I don't know her name). 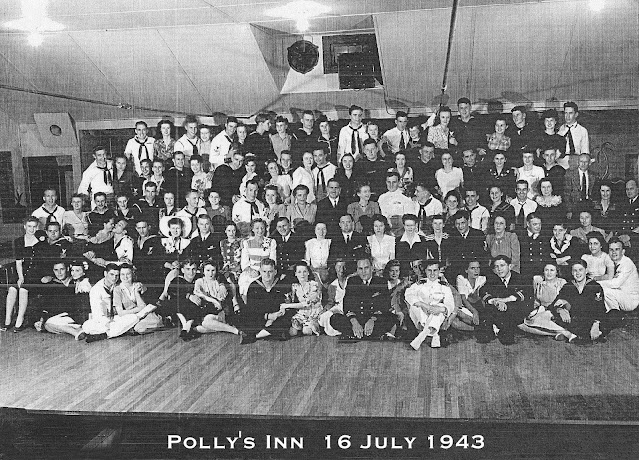 Click/Tap image to enlarge.
Image source: NavSource Online: Submarine Photo Archive.
He was drafted and joined the Navy (Seaman Second Class: No. 7258832). He served on the USS Corvina, a Gato-class diesel-electric submarine which had set sail from New London, Connecticut, on September 18, 1943. It arrived in Pearl Harbour on 14th October. I don't know if Daniel joined the crew of the submarine in Pearl Harbour or earlier. The Corvina set sail on her first patrol on 4th November 1943. Her mission was to patrol near the Japanese Navy Base at Truk Atoll (now known as Chuuk Lagoon). However, just over a week later on 16th November, she was hit by two torpedoes fired by the Japanese I-176 submarine, and sank with all 82 crew lost - the only US submarine sunk by the Japanese during World War II. One can only imagine the terror of the crew during Corvina's last moments.
Daniel Murphy was just 21 years old when he was killed in action. He was not the only crew member on board the Corvina with an Irish sounding name. The On Eternal Patrol website lists all the crew. The Commanding Officer was Roderick Shanahan Rooney, other Irish sounding surnames are: Ennis, Fahey, Jordan, and Maloney. Daniel is commemorated on the Honolulu Memorial in Hawaii where he is one of 12 Murphy's listed.
I'm sure Daniel's extensive US family will mark his 100th birthday today. Though my relationship to him is a distant one, I too wish to mark his birthday from his Irish family. I hope that it is appropriate to wish Daniel a "Happy 100th Birthday" even though he has been dead for 79 years.
* Family photos taken from the Jost Family Tree.
No comments:

Death of a Teacher

The tragic and untimely death of Ashling Murphy, a young teacher from Co Offaly, has struck a chord with everyone. A life senselessly cut short is difficult for us all to understand and the outpouring of grief and support for her and her family will last a very long time.

Aisling was a primary school teacher just starting out on her career. I can only imagine her excitement at being told she had a teaching job in the community where she grew up. But what should have been a 40-year career lasted just a few months. Teachers hold a special place in all our hearts. Like family, even oldies like me can recall who our teachers were many years ago - we never forget them. They help form us as learners and human beings - we learn so much from them and they have so much to give. As she is being laid to rest today, this is a desperately sad day for all. Ar dheis Dé go raibh a anam dílis.