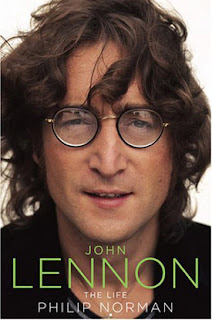 John Lennon was a hero to many people, as he still is to me. Ever since I started to listen to him belting out “Twist and Shout” on an old Beatlemania 45rpm vinyl record on our mono record player at home in Ballingate, I have been a huge fan of the Beatles and Lennon. I remember exactly where I was when I heard he had been shot – I was taking part in a Trinity College marine biology trip to Ballyvaughan, Co Clare. I was standing at a fireplace in a cottage waiting for breakfast when our bus driver Vinny, (who was first up ‘cos he wasn’t drinking the night before!) told me the news. For others, the deaths of Elvis Presley, Michael Jackson, Diana Spencer mark moments of shock in their lives - Lennon's senseless killing was the one for me.

Philip Norman has written a fantastic account of John Lennon’s life. He paints a picture of a man who led an extraordinary life from the violence of the Blitz during which he was born – to the violence of his death. Lennon was no saint or scholar when he was growing up, and there is lots of detail about his school days, his family problems, and the early music beginnings. I was interested to see that he was not good at school, failing his O-level exams. How could this be for such a musical genius? It seems that while he was very intelligent, he had no interest in learning and rejoiced in rebelling against “the system”. Only his Aunt Mimi seems to have any control over him. I wasn’t as familiar with his first 20 years as I was with his last 20 years – Norman’s book provides a superb background to the formation of Lennon as a musician. It is very well researched and written in a very easy to read style.

There are many explanations about the background to some of his songs. As a Beatles fan I knew a lot of this already, but there was plenty of new stuff for me. His many love affairs and promiscuity are also detailed – he certainly got laid a lot! The book ends with his death and there is virtually no comment on his legacy. There is (for me) a pointless section at the end of the book where Norman talks to Lennon‘s second son Sean. This adds nothing to the book as Sean was just a child when Lennon died and had very few memories – the interview simply repeats Norman’s description of John’s time looking after Sean in the Dakota apartment.
At the time of his death I recall reading an obituary in the Trinity News. The last line is still imprinted on my brain and expresses my thoughts about his death: Fuck you Mark Chapman, fuck you.
No comments:

Today, Roma and I visited the Fr. Murphy Centre in Boolavogue, Co. Wexford. Fr. Murphy was a rebel priest during the 1798 rebellion who met his fate at the end of a rope in Tullow after the rebellion was over. The Boolavogue Centre really has very little about Fr. Murphy who was a lodger in a farm that was located on the same site. Much restoration of old buildings is done - this work is very good and gives an idea of what life must have been like 200 years ago. The tour of Fr Murhy's does not take long, but it is complemented by a display of old farm machinery from the 19th century.
Overall, the Centre is worth visiting, though don't expect too much on Fr. Murphy. An excellent account (Fr. John Murphy of Boolavogue 1753-1798) of Fr. Murphy's life is written by Nicky Furlong which I read many years ago.

-- Posted From My iPhone
No comments:

Crete was a new destination for me - after much research, we decided to rent a villa in Platanias on the western side of Crete. Our villa was one of two Rock Houses, and was very modern and comfortable. I was a bit worried that it was very close to the Rock House pub (which only opens at 10 o'clock in the evening), but there was no noise from the pub. The Rock Houses are an excellent place to stay - very central to all amenities in Platanias. All that was missing was a view - it is surrounded by high fencing to give privacy from apartment blocks close by. The photo to the right shows a view from old Platanias towards the small harbour - the white arrows points to our villa. Rock Houses - recommended! 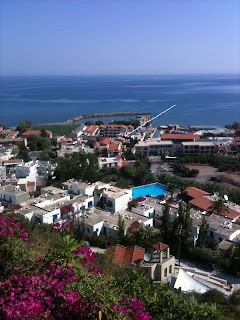 Platanias is a busy town, with lots of restaurants and shops. Most of the holiday makers seemed to be from Scandinavia. We met no Irish people, and only one British couple. Even the TVs in the bars were broadcasting Norwegian football matches! Best pizza ever is in La Gondola restaurant - don't miss it if you are ever in Platanias.
The beach was very close by, but I preferred the pool at the villa - mostly because of the very gravelly and hot sand at the beach. We had a car, which was not really necessary - but we did go for lunch to Kissamos (twice), and also had a trip to Chania for the day. Lots of places to eat and drink - so much choice, but only a week to sample it. Apart from the mad feckers on motorbikes on the main street - Platanias is a safe and ideal place to go for a holiday if you don't want lager louts and noise, but is not too quiet either. I really enjoyed it here and would certainly go back again.
1 comment:

Our (Roma, Vicki, her friend Aoife, and me) holiday abroad this summer was a three part trip to Greece - the first stage was three days and nights in Athens. We stayed in the Classical Baby Grand art hotel on Athinas Street - a cool hotel that I'd recommend. It has a champagne bar, but we did not go there. Athens is a really lively place - while not cheap, we did eat out a lot. It's somehow part of holidays for us Irish folks to be having dinner in a street restaurant knowing there is no risk of rain. One annoying thing is the constant pressure from waiters at every restaurant trying to get us to come into their restaurant - it's important to keep a good sense of humour and remain polite. We were also constantly bombarded by street sellers peddling anything from pirate DVDs, to watches and bags.

The highlight of Athens for me was the Acropolis (see some iPhone videos in previous post). It's a long trek up in hot weather, but worth every bit of effort. There is a fantastic view of Athens, but all you can do is look in amazement at huge Doric columns built over 2,000 years ago. A pity is is in ruins (mostly due to an munitions explosion during a was in 1687), though there is some super restoration work still going on. There is a massive crane still in the centre of the Parthenon, and the evidence of shiny new marble is present in a lot of places around the building - no doubt these will age in time and look less like the patch-work it is today. An unmissable historic attraction - I hope I can see it again some time, I'll be back. 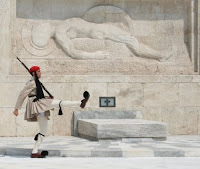 The rest of Athens was a combination of more sight-seeing, shopping, and the World Cup. I particularly enjoyed the changing of the guard ceremony at the Tomb of the Unknown Soldier. This is an elaborate, almost ridiculous, but nevertheless a very serious ceremony. There was quite a bit of giggling (mostly from Vicki and Aoife), but most people respected the ceremony. The unfortunate guards were clearly very hot, with sweat visible on their tunics - I was astonished to see that they were not even allowed to wipe their own brows, a supervising soldier did this for them.

The quarter-finals of the World Cup were also taking place - I managed to catch most of all the four games, with Germany looking like world beaters after thumping Argentina 4-0. Again, it was a nice feeling to be watching football at the side of the street sipping beer. I did miss Giles and Dunphy, and Après Match at half-time - the TV station (NET) that was on in most of the bars showed continuous ads during half-time.
1 comment:

On our short stay in Athens we just had to go and see The Acropolis and all its ruins. This is a fantastic site and even though it was quite early in the morning it was very busy. I had been here before in 2005 and had stood in awe at how buildings such as The Parthenon could have been built thousands of years ago without cranes, bulldozers, and bank loans. Once again I stood transfixed by the might of the Ancient Greeks. I got out my iPhone and shot two short videos - in this first, we are on top of the Acropolis...

For my second video, I was on top of a nearly hill which looked up at the Acropolis. According to an information sign I was in the posh part of the old city that occupied this site (the Greek word "Acropolis" stands for "city on the edge"). This also gives a great view of the centre of Athens...
Athens is a bustling, hot and dusty city - it is also very noisy with a lot of mopeds and motorbikes about. I really liked it. We were there for three nights staying in the Classical Baby Grand art hotel on Athinas Street. This is a comfortable hotel, though we did get a standard room for Vicki and Aoife, and a Deluxe room for Roma and myself. Unfortunately we couldn't tell the difference between the two and only saw on our bill that Roma and I were in the standard room while the girls got the "luxury" room! It's not worth the extra cost to get a "deluxe" room.
No comments:

The BBC reports that nearly two million more Britons have come online during the last year, over half of which are over 50, according to new research by the UK Online Measurement Company (UKOM). It's usually OK to assume that Ireland is not that different than the UK, and that these figures are comparable with what is happening here. The BBC also reports that the majority of internet newbies were made up of over-50s, with more men than women joining up, and that Internet services are increasingly targeting the older generation.
The report also states that the older generation are attracted to a range of sites, including travel, genealogy, fashion, video and community sites. Interestingly, I have never heard of any of the 10 most popular Internet sites for the over 50's listed in the report (I wonder what the top ten Irish sites are for over 50'?):
It's no surprise to me that the over 50's are the fastest growing group who are accessing the Internet. This is why initiatives such as Age Action's Getting Started with Computers are so important to encourage more of our older people to get on-line. The chart below shows the breakdown for Internet audience this year - surprisingly the figures for male over 65's is much higher than for females of the same age (while the breakdown is much more even in other age groups).