In 1936, Wicklow won the first of the county's two All-Ireland Junior Football titles by beating Mayo 3-3 to 2-5 (they won a second in 2002). Us Wicklow natives don't have high expectations when it comes to All-Ireland success, so it must have been an exciting and happy occasion when they won the first title in 1936. I still wear my Wicklow jersey to Croke Park when other teams are playing - the photo to the right with Roma was taken at the Mayo vs Kerry All-Ireland Senior Semi-final in 2014. Despite living in Dublin since 1978, I don't consider myself a Dub.

As I was going through some more old recently discovered photographs with my Dad, we spotted his father PJ O'Loughlin sitting on the steps of the Bel Air Hotel near Glenealy with four other men. He said they were there to celebrate Wicklow's 1936 win - date is confirmed on the photograph. In the Leinster GAA web site there is a photo of the victorious Wicklow team which includes the then County Secretary, my grandfather PJ O'Loughlin (standing at the left wearing suit in photo reproduced below). PJ was not a native of Wicklow, he was born and reared near Newmarket in Co Cork. 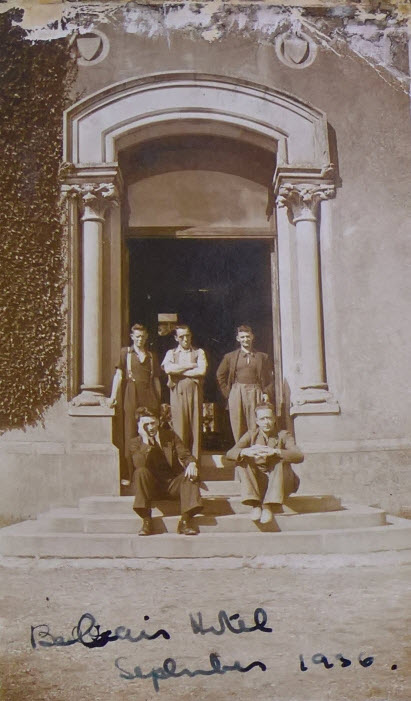 I'm guessing that none of the men in either photo are alive today (they would be over 100 years old if they were), and looking back at old photos it is a strange feeling to think that they are all dead (my grandfather died in 1965). None could have predicted or envisaged the world we live in today - if you told them their photo would be on the Internet 80 years later, I'm sure they would have laughed at you!