I wonder what anyone called "John Smith" thinks when they walk through a graveyard? What do they, or anyone think when they see a headstone with their name on it? Does the old "someone walked on my grave" thought come into their mind?

Recently while researching some family history I was checking to see if I could find the grave of my great-grandfather Joseph O'Loughlin who we know is buried in Clonfert cemetery near Newmarket in Co Cork. My father's ancestors come from the area around Newmarket, though his own Mum and Dad left for Carnew in Co Wicklow in 1929. On a visit to this cemetery with my Dad in 2008, we could not find the grave, though we did find the grave of my maternal great-grandparents (Thomas and Bridget Hurley). 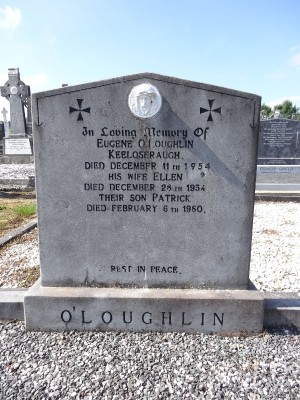 Image source: Historic Graves.
Clonfert Cemetery was surveyed as part of an IRD Duhallow Leader funded training project in November 2012 - each grave headstone was photographed, cataloged, and displayed on the Historic Graves website. While searching for O'Loughlins on this site I came across the one to the right with my name on it "Eugene O'Loughlin, died December 11th 1954" (CO-CLFT-0832). It's an odd feeling.

My Mum tells me that when I was being Christened in October 1959, there was an expectation that I would be named after my grandfather PJ (Patrick Joseph) - instead, I was named after Pope Pius XII (real name Eugenio Pacelli). Even in the O'Loughlin household, the Pope ranked higher than my grandfather! However, PJ did point out to my Mum that there was a Eugene O'Loughlin in the family (his cousin or uncle). I wonder if the Eugene above is the man he was referring to? A little more digging will hopefully reveal more.

On that morbid thought - it's on with the rest of the day!