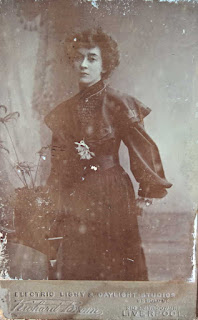 Finding details about our ancestors is certainly getting easier, thanks to the millions of records published by Irish Geneology. Today I have been looking up information about my Great-grandmother Anne Cullen (née McCann) - my Mum had asked me to check her our as she wondered if Anne's mother was from Wales (I found no evidence of this). She is the mother of Kathleen Cullen, who is my mother's mum. Here's what I have found (all links will take you either to original documents or to Google Street Maps/Views).

She was born on 24th December 1874 - the birth was registered in Gorey. Her parents were James McCann and Catherine Walsh (name possibly confused with Wales) - they lived in the townland of Kilnahue just outside Gorey. Below is a copy of the registration of her birth (click on lick in the caption to go to actual document).

The photo to the right was taken for her 21st birthday (1895). She married Richard Cullen on 12th November 1905. She was nearly 31, and he was 35 years old. The register shows that they were married in St James's Church which is on James' Street in Dublin. You can see on the register that she was known as "Annie". Her address was 13 Gambier Terrace in Liverpool, England (you can see that the 21st birthday photo of her was taken by the Electric Light and Daylight Studios based in Liverpool). My Mum tells me her sister lived in Liverpool. Her bridesmaid was Margaret Cullen, Richard's sister, and known as "Aunt Maggie" in our family. The Best Man was Jas(?) McCann - I'll need to check with Mum who he is.

She and Richard lived in 5 Ashford Cottages, which is in Arbour Hill in Dublin 7. I know from my Mum that they had previously lived in nearby 6 Ivar Street. This is where they are listed as living in during the 1911 census. Anne died on 4th March 1952 in St Kevin's Hospital in Dublin. The cause of death was "Hypertensive Heart Failure". She is buried in plot A2-624-23450 in Mt Jerome Cemetery in Dublin.