On August 3rd last I published "Exploring Ireland's Wild Atlantic Way" to the Kindle platform on Amazon. While the book was also re-published as a paperback a month earlier, I had the problem of how could I generate sales if no one knew it existed. When the book came out first in 2014, I had the publicity of two radio interviews (RTÉ and Newstalk), lots of Tweets, it was the first book about the WAW, and there was also lots of publicity from Fáilte Ireland as they officially launched the WAW that year. Now there are several books, including one by David Flanagan and Richard Creagh who stole my title (apparently that is allowed, there is no copyright on titles). August is also late in the year to release a book about the WAW.

In order to let people know that the book was available again, I first decided to try Google Adwords. However, this is for businesses only and I would have had to set up a website dedicated to the WAW book from which I would have to sell the book from. It was not possible to point Google Ads at a page on Amazon. Then I discovered that Amazon sells advertising, and I decided to try out a short ad campaign with a budget of $100. It was really easy to set up:

I ran the campaign from the 8th of August to the 7th of September. The ad was displayed 41,697 times, but only generated 266 clicks. It is only when a computer user clicks on the ad that I have to pay for it - you can see above that these 266 clicks cost me $62.10. So did this campaign work? Sort of.

The sales for the Kindle version of the book during the campaign are charted below. It shows 19 books sold (red line) and some readers who accessed the book through Kindle Unlimited (blue line). 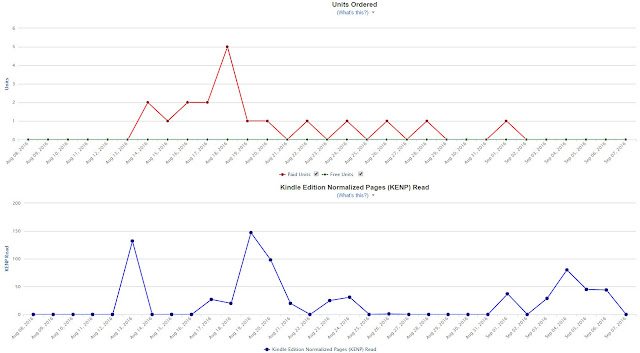 The revenue from the sales above fell just short of campaign spend - the book is very cheap (£3.77) on Amazon. Since the campaign ended on Sept 7th, I have sold just four books in just over a month. It is safe to conclude that advertising generates sales, though not enough in my case to cover the cost. I will give it another go around May/June next year when tourists might be planning a holiday on the WAW - I may need to adjust the price upwards a little to cover costs.