I have been searching the Irish Geneology website for information about my great-grandfather Joseph O'Loughlin. The search is made difficult because he is found under two surnames "Loughlin" and "O'Loughlin". I have not been able to find a record of his birth in 10th April 1864, nor of his death in 1916 - perhaps it is the mix of names that are causing difficulties with searches. He was a farmer from Knocknegree near Newmarket in Co Cork. His father was Patrick O'Loughlin (1821 - 1897) - my great-great-grandfather, the farthest back I've got on this part of my family tree.

Joseph O'Loughlin was 38 when he married Mary Cosgrave of Barnacurra on 4th February 1902 in Newmarket - here's a copy of their marriage certificate (click to enlarge): 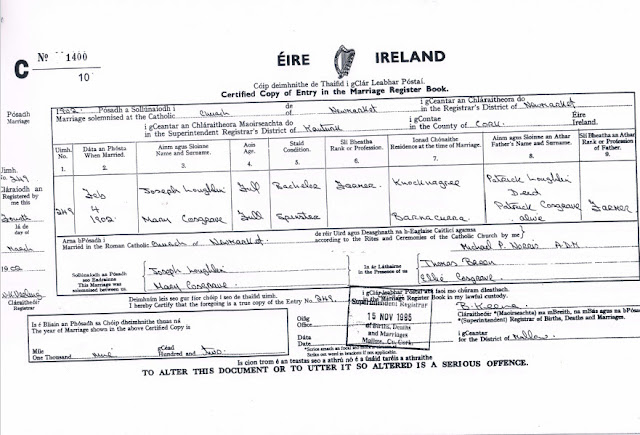 The Best Man was Thomas Breen, and the Bridesmaid was Ellie Cosgrave. Fr Michael P. Norris was the celebrant. Sadly, Mary died just nine months later - here's a copy of her death register:

The cause of death was a "Haemorrhage - ante partem" - this indicates that she died just before childbirth. There is no record of the child being born. She was just 38 years old. The second name on the Death Register above is thought to be her mother (also Mary), who died just three weeks after her daughter.

Joseph married again to Julia Murphy from Lisrobin on 16th February, 1904 in Boherbue - just over a year after Mary died. Here's a copy of their Marriage Certificate: 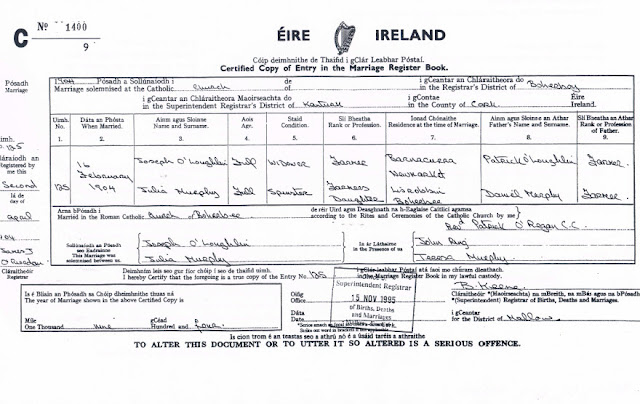 I note that in the first marriage to Mary Cosgove, Joseph is listed as "Loughlin", in the second he has acquired and "O" and is listed as "O'Loughlin". The Best Man was John Ring, and the Bridesmaid was Teresa Murphy. Fr Patrick O'Regan was the celebrant. Interestingly, Joseph is now listed as being from Barnacurra (where his first wife was from) - perhaps he inherited the farm from his late wife. Below is a photo of the house (with my Dad peering inside) in Barnacurra: 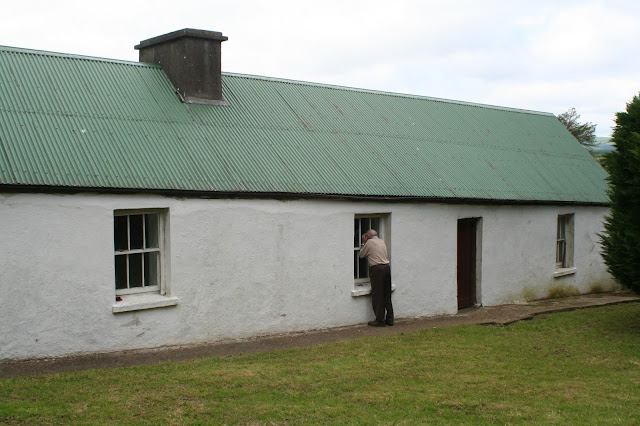 Joseph and Julia had just one surviving child - PJ (or Pattie), my paternal grandfather. PJ was born on 22nd December 1904 - just 10 months after Joseph and Julia were married. Here's a copy of his Birth Certificate: 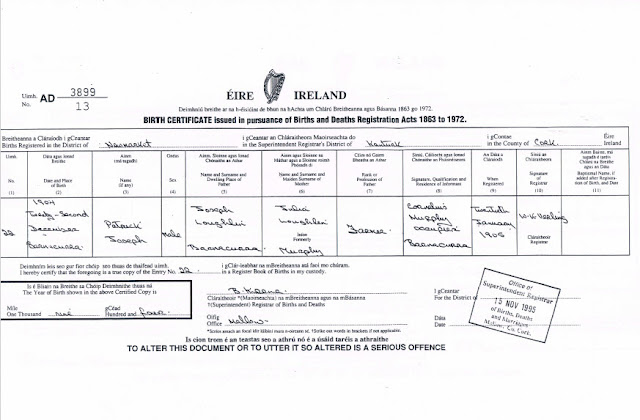