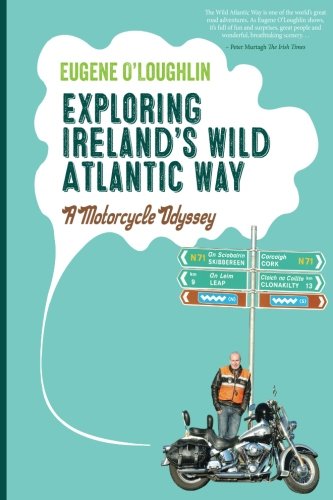 Just before I went on holidays to Boston I finished the re-work on my 2014 book Exploring Ireland's Wild Atlantic Way - it is now available again to buy in print from Amazon (here). It has not been available for a year and a half, but thanks to Amazon's Createspace it is available again as a print-to-order book.

The book is priced at £26.90 at Amazon.co.uk - far too pricey for a book of its size and quality. It has sold two copies already, but I don't expect to sell very many at this price. This was the minimum amount that Amazon will allow me to sell it for. It is also quite late in the summer - anyone thinking of touring the Wild Atlantic Way this year may already have purchased one of the several books that are now available about this route.

The re-work was a lot more than I expected. My starting point was an original PDF copy of the final proof that went to the printers in 2014. All 169 images had to be replaced - I had to resize the original photographs (10.97 cms wide) one-by-one and insert them into a new Word document. The position of each photo on each page was also hard to work out as I could not set my Word document page size to be the exact same as what the print version of the book would be. I had to upload the book several times to Createspace to see what it would look like - this took a lot of time. Apart from correcting very few typos, I didn't change any of the text. I removed two poor quality photos that I was not happy with, and added two new ones.

Self publishing is a fantastic way to get a book out. It was brilliant for me that The Liffey Press released the book back to me, and that I could use Createspace to republish. This was also the mechanism that I used to publish Exploring Northern Ireland's Causeway and Mourne Coastal Routes last year. It has not sold well at all in print, though the Kindle version has done better. I'm hoping that the re-publication of the Wild Atlantic Way book might improve sales a bit more.

My last task with this book is to release it as a Kindle version - this is what I have wanted to do for a long time, and is my best hope at a few sales. It will also be a lot cheaper - I'm hoping that I can sell it for less than €5. Again, it is the photos that will take up all the work. Position on a page will not matter too much because a Kindle allows different page and font sizes. Hopefully I will have this version available before the end of the holidays.