My Mum tells me that she remembers going to a funeral many years ago in Donaghmore which is an old cemetery right beside the coast between Ballygarrett and Courtown in Co Wexford. So I searched without success in this small cemetery for a headstone with the name "Cullen" on it. While there was a burial there earlier this year, I'm told that the cemetery is effectively closed - possibly because of its proximity to the coast (where erosion is a severe problem) and that there is a more modern cemetery in Ballygarrett. There is a small ruined church at the cemetery which has some connections to St Patrick.


Some interesting headstones in Donaghmore Cemetery... 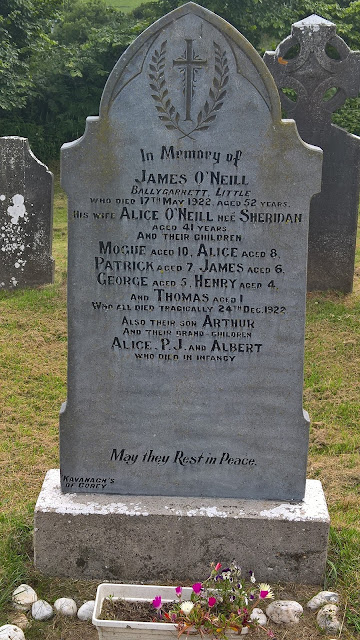 The O'Neill family perished in a fire on Christmas Eve in 1922. According to the Irish Independent of 17th April 2012, Alice O'Neill was a widow who had let go some farm hands because she could not afford to pay them. It is thought that the fire might have been started deliberately in a nearly hay rick, but spread with tragic consequences to the house containing Alice and her seven children who perished. 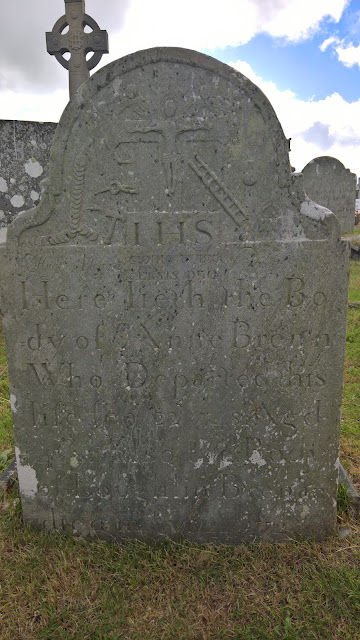 In 2014 Wicklow County Council published "Here Lyeth - The 18th Century Headstones of County Wicklow" by Chris Corlett. It is of particular interest to me in that Denis Cullen, who I believe to be my ancestor, is lauded as a skilled stone-carver of headstones. The Cullens were based in Monaseed, Co Wexford, and according to Corlett in his book - they are responsible for many fine headstone carvings in Wicklow and Wexford. The headstone above is one of many ornate headstones in Donaghmore which are similar to the type that Cullen and his son created in the 18th/19th centuries. It is not signed (as Cullen typically did), so it may not be a Cullen original. Another stone nearby looks as though it might be a Cullen one. Above you'll see carvings of Christ on the cross, a ladder, a hammer and nails, and interestingly - 30 pieces of silver. 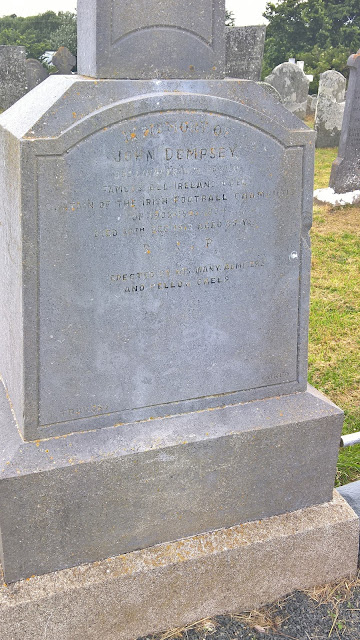 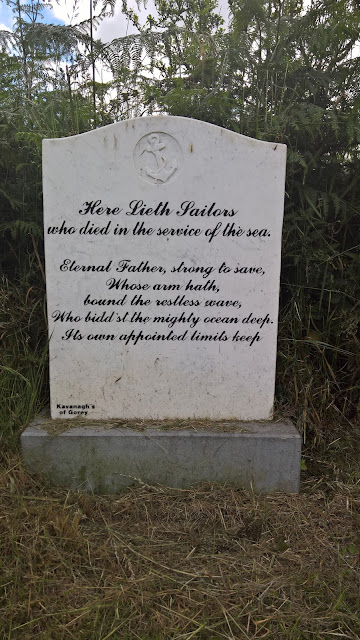 The above headstone is a more recent addition to the cemetery. It quotes the 1851 hymn "Eternal Father, Strong to Save" which is dedicated to  seamen everywhere. What sailors are buried here I do not know - I'll have to inquire locally about this.