While visiting Arklow yesterday I also decided to take another look at the Arklow Rock that I had last seen on my round Ireland trip (which lead to my book: Exploring Ireland's Wild Atlantic Way) in July 2012. I had taken some photos at the time, but they were from quite a distance away - yesterday I hoped for a closer look.

Many millions of years ago, the Rock was an active volcano. The lava bubbling from the earth's core left a legacy of imperishably, and valuable, hard basalt stone. Charles Stuart Parnell started the first quarry here in the 19th century. The local GAA club, Arklow Rock Parnells, is named in honour of both. Today, it is the site of a Roadstone Quarry, I noted that the rocks quarried here are being used in the erosion protection works going on at Donaghmore near our house. There are plenty of signs everywhere warning of danger, two local walkers told me that I could walk up to the top of the quarry, but that Roadstone don't like people doing this - on I went. 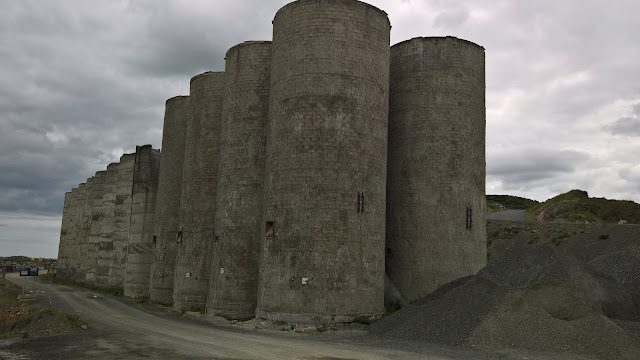 The first thing that greets you are giant towers that are no longer in use. At one time there was a house like structure on top of these towers, which in turn fed lorries to take stone and sand away to build roads. There is also a harbour here and lots of stones protecting the cliffs at this part of the coast. I walked first to the "Hanging Stone" beach before doubling back to see the quarry.

The quarry is huge. The rock is cut in layers to make it easier to blast and cut. One day Arklow Rock might be no more - it is being eaten away bit-by-bit. From the top of the quarry there are brilliant views back towards Arklow and beyond. This was a very enjoyable walk, and worth the effort to check it out.