We certainly got our money's worth at Fenway Park last evening. We were in the presence of a superstar - David Ortiz. We got a thunder and lightening show. We had beer and hot dogs. We became experts in "balls" and "strikes". Above all we learned how passionate Americans are about baseball.

We had great seats in the iconic Fenway Park for MLB game against the Los Angeles Angels - this was a first ever baseball game of any type for us. We were in a covered area of the grandstand which turned out to be a stroke of luck, as heavy rain and thunder interrupted the game for about 1.5 hours. We had a beer and waited it out - as we had no rain gear we weren't going anywhere. The game resumed after the rain stopped at 11 o'clock - curiously throughout the delay there wasn't a single announcement about the stoppage. 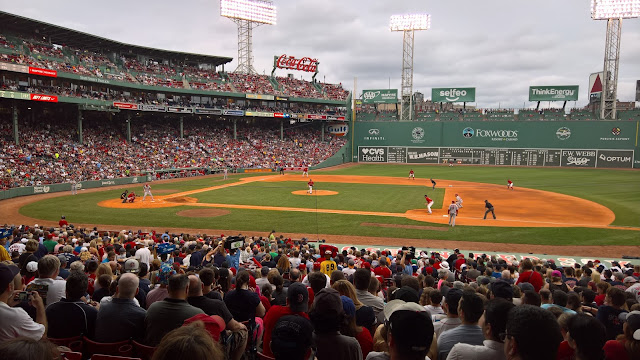 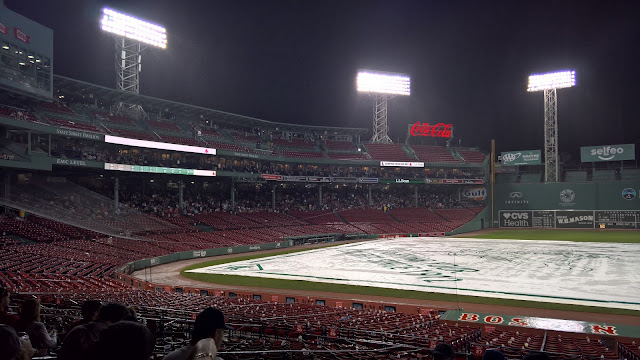 The crowd's hero was 40 year old David Ortiz, and he delivered with one of just two home runs in the game. The other home run was for LA Angels who had loaded bases at the time for a score of 4. The game ended 5-4 in favour of the Red Sox. Huge numbers had left the stadium during the rain stoppage, though I was greatly surprised at how many stayed to see their heroes resume after the stoppage. It was also interesting to see how the covers were set up and taken away - very efficient.
Overall - a baseball game is a fantastic American experience. It helps if you know the rules of the game. I bought a Red Sox cap before the game and I guess that makes me a fan for life.