Last week my YouTube Channel passed 10,000 daily views for the first time since 28th April 2015. As always, I am both delighted and humbled that so many people watch my videos and find them useful. From early 2015 to the end of April 2015, the channel regularly surpassed 10,000 daily views. At the end of April I did some stupid stuff to increase views, including poorly designed thumbnails for each video. This resulted in a collapse in views clearly visible in the chart below - it has taken a year and a half to recover after I reversed these changes earlier this year: 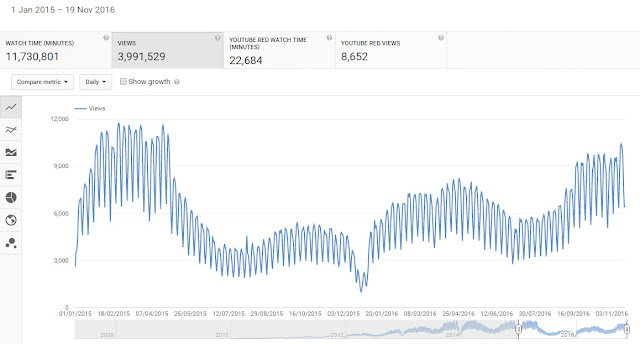 The number of views followed a similar seasonal pattern to previous years, last Tuesday views reached 10,431, and actually surpassed 10,000 views three days in a row. This is still a long way off my record day on 25th March 2014 when the channel had 11,944 views.

I have added 12 new videos this year, but videos take a long time to get a lot of views - these 12 have just about 12,000 views between them this year. Revenue from ads has also fallen, though it too is showing some signs of recovery in recent months. I'll be interested to see if trends continue. There should be a fall-off this week due to the Thanksgiving Holiday in America, and also it is getting close to the seasonal fall-off for Christmas and the New Year.