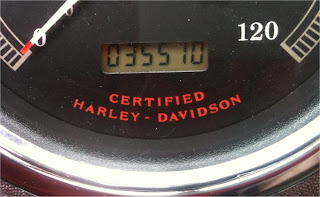 At the start of my journey the clock on the bike reads 35,510 miles (51,148km) - I'm guessing that I will add about 3,000 miles (about 4,800km) to this total by the end of the trip. The first part was easy - we left Dublin at 11:30 in plenty of time for the boat. We just about got here before the rain - the heavens opened just after we boarded. Lucky! We've had a beer and explored the boat. It does not seem to be full, but there are a lot of families (and a few bikers). The predominant language on board seems to be Polish (or some of its Eastern European cousins). I haven't met an Irish crew-member yet, and have heard French been spoken just once in the four hours we have been on board.

This ship is like a floating town - there are plenty or restaurants to choose from, we're thinking Steakhouse for later. There are also many bars - loud music is expectedr. I have to say that is it comfortable so far, the sea is not rough and I'm looking forward to a good sleep. The bike ran well for the 95 mile trip today. With the extra weight on the back it handled a bit light. I did my first ever "wheely"! Coming out of Enniscorthy Pat opened up his Road King and I accelerated to follow. The front wheel lifted, but not by much - an inch I'd say. Perhaps thos was due to the weight being mostly at the back. Nevertheless this is the first "wheely" I've ever done - not sure I'll want to repeat this feat. Cherbourg to Niort tomorrow - next blog post will be from hotel in our destination.