Willie O'Dea shoots himself in the foot 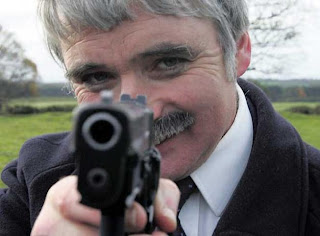 I have been sort of following the Willie O'Dea mess over the past 24 hours. I heard the reports and the damaging tape on the News at One on RTÉ. His interview with Seán O'Rourke was riveting stuff as he basically owned up to everything, admitted all, apologized, denied perjury, and was (I thought) sounding very low and about to give up. The sound of the stable door slamming shut could be heard all over the country. For me, the key moment was when he stated in the interview that he was a "victim" as well. Perhaps he is, but he cannot dilute his own guilt by placing himself in this position. The Greens have been despicable in all this - yesterday they voted confidence in him - today they demanded his head. They were never going to get my vote anyway, so they couldn't do themselves any more damage as far as I'm concerned. Today I tweeted that WO'D should resign - my tweet....

eoloughlin Fine Gael going mad over Willie, Twitter going mad over Willie, even I'm mad at Willie - Time to go - RESIGN! #willygate
Twitter was alive with tweets about Willie today - I was following #willygate.
I'm a Fianna Fáil voter, and most likely will still be at the next Election (Mary Hanafin, if you are reading this you'll always have my vote!). But WO'D compromised himself with his careless and untrue words - he shot himself in the foot and has nobody else to blame.
WO'D got 19,082 first preference votes in the 2007 Election - second only to Brian Cowen who had 20 votes more. What are the odds on him increasing his vote in the next Election? The people of Limerick-East love him, already there were people (including folks from Limerick) on the News singing his praises, what a good job he did in the past, and that he will be a big loss (especially to Limerick). His Cabinet political career is over, though no doubt he will hang on as a TD for a long time yet. He will be more outspoken, as he has been in the past, and God help any Opposition politicians who want to have a go at him in the future - he will not hold back, he has you in his sights!