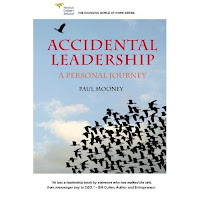 I have just completed reading Dr Paul Mooney's new book Accidental Leadership: A Personal Journey. Paul Mooney is President of NCI (where I work), and is retiring at the end of next February. In his new book, he describes his experiences in leadership roles both at NCI and in several previous jobs. Dr Mooney gave me a signed copy of the book (I swapped with one of mine!). As the title suggests, it is a very personal journey. You know you are going to get honesty when on the second page he talks about leaving school at 13 years of age: I didn't leave school because of financial pressures. I left because I was a complete gobshite.

The book is a combination of experiences and the concepts of leadership. It is an easy read that is not heavy on theory - the blend of personal thoughts, "war stories", theory, practical suggestions, and some insight tit-bits of his role as President of NCI. I enjoyed the discussion of drawing up the new College mission and strategy as I was a member of one of the groups that determined the new strategy. A huge number of the staff were involved in this and it was a great way for Paul to get to know the staff as well as getting "buy in" for the new strategy. I felt at the time that this was a great start for him as the new President.
On page 69 Dr. Mooney discusses what he calls the elephant in the room - productivity at third-level and how difficult it is to get individual performance data on academics. He describes an insider joke (that I had never heard before) that you'd have more chance of an academic allowing you to watch them having sex than watch them teaching a class. In my time at NCI (2002 - present) not one person (other than students of course) has ever observed me in class (nor as far as I can tell - watched me having sex!). I didn't know either what to make of the description of Academics as being either Minimalists or Status-Ticians (pp 74-75). As I was first reading this I turned the page to read what the next/third description was as I (honestly) didn't recognise myself as either of the above two - to my surprise there was no other type! Now I have to figure out which type I am. As an "academic" myself, this section makes uncomfortable reading, even though Dr Mooney points out that there are both types in every profession and that it is a challenge for leaders to do something about it.  Apart from this section, the book was an enjoyable read.
The book is published by The Liffey Press who also published my own book. Nice to see a plug for my book which is listed as being part of NCI's The Changing World of Work Series.
NB
This review was written on 23rd December, 2009 when I actually finished reading the book. I decided not to publish it until after Dr Mooney had left the National College of Ireland.