Formal Launch of "An Introduction to Business Systems Analysis"

Last evening, I had the formal launch of my book An Introduction to Business Systems Analysis. The Launch was held in the National College of Ireland President's (Dr Paul Mooney) office and I had an excellent turnout of about 50 people. I was thrilled that so many friends and colleagues attended - thank you all for our support and good wishes. I was particularly pleased that my Mum (Phil) and my Dad (Joe) were able to attend - I know that they had an enjoyable evening. 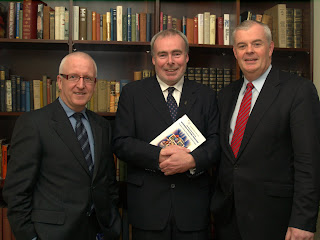 The book was launched by Mark Ryan, who is the top man in Accenture Ireland. Mark is also a fellow Cistercian College Roscrea classmate (1972-1977) and when I met him at the CCR Union Dublin Branch dinner last October he kindly agreed to perform the launch. Mark said some very kind words in his speech in support of the book - much appreciated. I also made a speech in which I mostly thanked people for their inspiration and their help - especially Dr Paul Mooney, Phil Chambers, Dominic Martin, and my family. I had a fantastic evening during which I managed to get to chat to most people that attended. We also sold a few books which raised a nice few euro for the NCI Foundation - I had great fun signing these for friends and colleagues. I discussed four possible speaking engagements with people who attended - great for increasing publicity for the book. This evening I was invited to be interviewed by Dr Paul Heslin (another CCR connection - who says that the "Old Boys" network doesn't work?) on Dublin South FM Radio - very exciting news!

Afterwards a few of us adjourned to the Clarion Hotel for dinner which was most enjoyable. I finally feel a great sense of achievement and pride in the book, which did take a long time (18 months) and a lot of effort, to write. However, this 15 minutes is now over, and it is time to move onto my next project (a web site - more about this when I get it working). I do hope to promote the book as much as I can - through contacts, speaking engagements, the odd radio interview, and through YouTube.