The Leather's Echo by Jim Brophy

I have borrowed a copy of a book about the history of Wicklow GAA written by the late Jim Brophy as part of the GAA's Centenary celebrations in 1984. Thanks to my good friend and colleague, Leo Casey, for persuading his wife Máire, who is Jim Brophy's daughter, to part with this precious book for the weekend. My grandfather PJ O'Loughlin was County Secretary from 1935 to 1940 according to the Wicklow GAA website, though Brophy's book states that it was from 1935 to 1942. I have written in a previous post about my Grandfather and his connections with the GAA, and also another post about my fond memories of him (he died in 1965). Wicklow is one of only two counties (the other is Fermanagh) who have not won provincial football titles, and of course have no All-Ireland Senior titles. However, Wicklow did win the All-Ireland Junior football title in 1936 when my Grandfather was County Secretary - he's the guy on the left in a suit in the picture (taken from Wicklow GAA website) below: 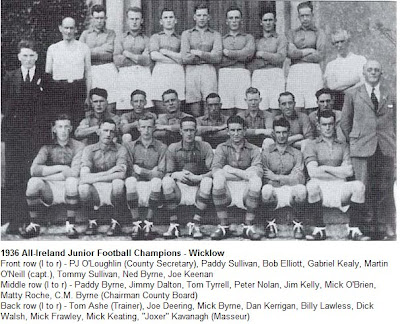 Also in the book are references to when my Grandfather first became Vice-Chairman in 1932, and then County Secretary in 1935 - below are two images extracted from Jim Brophy's book:

A surprise for me, and my Dad when I spoke to him this morning, was that PJ had played hurling for Carnew Emmets and even won the Wicklow Junior Hurling final in 1932 - see extracts from Jim Brophy's book below:

Dad recalls PJ playing hurling at the back of the family farm in Tomacork (a townland just outside Carnew), but did not remember any mention of above achievement (Dad was born in 1931). Nor indeed did he remember that there was once a hurling team in Tomacork. Interestingly when I read out the names of the Tomacork, it turns out that Pat Holmes was a "Son" Holmes that worked for my Dad on our farm whom I remember well. He was a wonderful story teller - I especially recall his ghost stories and tales of Wicklow Rebel Michael Dwyer.