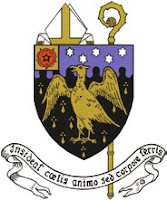 On Saturday last I donned the tuxedo for the second time in two days and went along to the Cistercian College Roscrea (CCR) Past Pupils Dublin Branch dinner. We met in the Ginger Man for a pint beforehand - present were Pat Cleere, Mark Ryan, Liam Lenehan, George Mellotte, John Irwin, Kieran Walsh, and Geoff Coman. At the dinner we joined up with Eugene Hardiman and Paul Heslin. Many of us had met in early October - this time the evening lasted a lot longer. I also got talking to some lads from my brother Joe's year (1978) who were all curious as to how Joe is getting on.

There were some speeches, with Past Pupils Union President Gerry O'Meara bringing us up-to-date with what was going on in the College. I had a long conversation with Gerry later on about my Mum's side of the family (the  Byrnes) who I thought originated from Gerry's home town of Lorrha, Co Tipperary. Gerry kindly emailed me this evening with news that there were no Byrnes in Lorrha matching my description, after he had spoken with his own Dad. Rubgy player Gavin Duffy (a CCR old boy) also gave a good and interesting speech, which was probably of most interest to rugby heads.

We had good banter and craic - washed down with a liberal quantity of pints. It's a long time since I walked so crookedly out onto the street! One bad mark for the Davenport Hotel - the food was poor and there were no potatoes for our table as they had run out. For boys who had lived on potatoes in the 1970s this was an unforgivable oversight.

Any CCR old boys reading this - keep in touch.