Saturday in Paris - we decided to do a mix of tourist and non-tourist activities, and some shopping. In the morning we had breakfast (coffee and crusty bread) in the Paris Madeira Brasserie, which was just down the street from our hotel. After this we did some shopping - Roma went off and bought some clothes, while I browsed around a few shops. I even bought a  scarf in Galeries Lafayette, though was more interested in the fnac electronics shop.

Then we set off for the Notre Dame Cathedral. I have often thought that people who would have seen this building hundreds of years ago would have been in no doubt as to the existence of God - it is magnificent. Even though it was still early, we had to queue to get inside - you don't see queues at churches much any more. Despite the presence of hundreds of tourists inside, there was a calm reverence. We looked around (I even said a few prayers to myself), and enjoyed the photographic display about Saint Thérèse of Lisieux. Whatever one's thoughts about religion (and the Catholic version of it) - the Notre Dame is still inspiring. 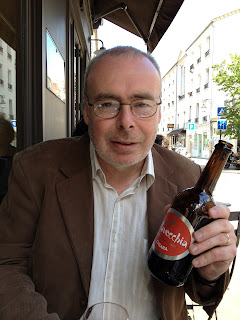 Later we went to the Butte aux Calles area where we had heard about interesting off-tourist attractions like narrow streets and interesting shops. Not many interesting shops, but we did have a nice lunch at Les Calloux Italian restaurant - the photo to the left shows me holding a €15 bottle of beer. We just had one between us! The food was delicious here - we both had pasta dishes. A much quieter and calmer location than in the hectic central tourist attractions. We browsed through a very long street market of junk antiques.

In the evening we looked around the area local to our hotel - the Opera location is great for a variety of restaurants and we dined later in a Japanese restaurant. Ordinary Sushi served at breakneck speed - we were in and out in an hour. We were again exhausted at the end of the day.

Email ThisBlogThis!Share to TwitterShare to FacebookShare to Pinterest
Labels: Paris