The 1932 Eucharistic Congress, and a little bit of family history

While at home in Ballingate yesterday, I told my Mum and Dad that I would be participating in the Statio Orbis mass as part of the Pilgrim Choir in Croke Park for the 50th Eucharistic Congress. Neither of course have any memory of the last time the Congress was held in Ireland 80 years ago in 1932 (Dad was 1, Mum was not yet born).
Th 1932 Congress was a huge event in Ireland - it was one of the first opportunities after Independence for the fledgling State to take its place among the nations of the world. Yesterday my Mum gave me a flag which originated in 1932 - the provenance is that she got it from my Dad's Mum Kathleen O'Loughlin (née Hurley) when she moved from Kimmage to Kilcoole - a sort of "Who wants this?" moment. Mum recalls that Kathleen (called "Katty" in her youth) said that it belonged to her sister Eileen Dwyer - affectionately known as "Mrs D" to us all. It may have been hung from a window outside her house in 1932. I was fascinated by the provenance, and also the superb condition in which this flag still is. The flag has a simple design - a Celtic cross with the chalice and the Eucharist in the centre. I think I'll bring it to Croke Park for the Statio Orbis mass on June 17th. 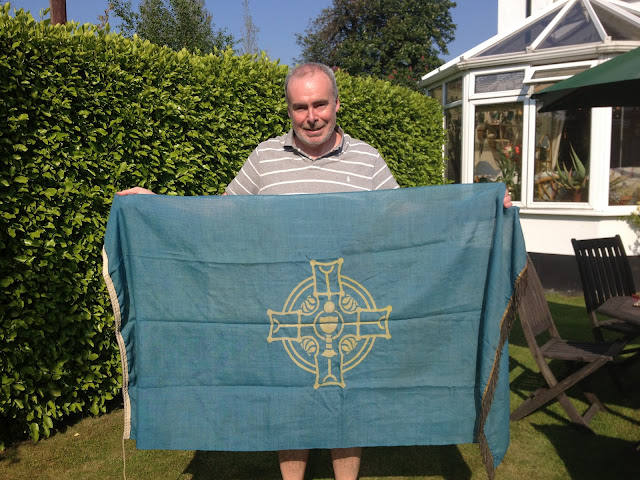 Email ThisBlogThis!Share to TwitterShare to FacebookShare to Pinterest
Labels: Congress