The Mouse That Roared

There isn't a more profitable undertaking for any country than to declare war on the United States, and to be defeated. 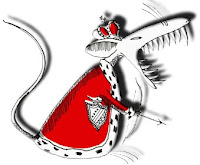 In 1955, Irish American writer Leonard Wibberley wrote a satirical novel about the Cold War entitled "The Mouse That Roared". In 1959 this was turned into a film of the same name starring Peter Sellers and (the tragic) Jean Seberg. The theme of the film is based on a crisis in Grand Fenwick when its wine industry is threatened which would result in a total collapse of their economy. Learning lessons from the Marshall Plan which was funded largely by the US for the rebuilding of Europe after World War II, the Prime Minister of Grand Fenwick decides that the only way out of the economic mess was to declare on the US and deliberately lose. Reconstruction funds would surely follow. To get a flavour for what the movie is about, here's the movie trailer from YouTube:
Sadly for Grand Fenwick, the plan didn't quite work. In their only act of war their army of 24 men unintentionally captures the Q bomb which could destroy the world if detonated. The US has no choice but to surrender.
So - I have a plan to get Ireland out of the current economic mess. Let's declare war on someone now!
We know the USA is a big and rich country - so they would be the best target. But I'm not really that fussy about who we declare war on. The UK or Germany would also be good bets - anyone with money will do. To start the war we must make a declaration. This should be done by President McAleese after midnight so that the declaration would make prime time news in America.
We then need a small army, cleverly disguised as tourists, to invade and strike a blow for economic freedom. The army should be lead by General Jack "Put 'em under pressure" Charlton. We will have few weapons - so we'll have to resort to threatening to bore the Americans to death. I have a lot of choice for the "Death by Boredom" squad leader, but I've selected Enda Kenny to do this. Transport - that's easy, it will have to be economy all the way, so Michael O'Leary will be in charge of this. Ben Dunne will be in charge of provisioning the army with beans on toast. The cook will be Darina Allen who can also double as a mascot and add a bit of class. Tesco will provide the necessary communications infrastructure, ie a mobile phone with €10 credit. Infantry should be made up of a team that never wins anything - the Kilkenny footballers or the Wicklow hurlers come to mind. The Wicklow lads might be best if they promise to bring along their hurleys as weapons. We'll also need a diplomat to negotiate our surrender - Dustin the Turkey would surely make the required balls of this. Finally, Michael Fingleton and Seán Fitzpatrick will make up the suicide bomber squad.
So what would this motley crew of Ireland's finest actually do as an act of war before the surrender? Well I thought about what Americans value and I've decided that Irish army should occupy the Statue of Liberty in New York and threaten to blow it up. This would provoke a confrontation with a SWAT team who will demand our immediate surrender. Job done!
We can't afford to win the war (where would we put all the prisoners?), so it is essential that it ends in our surrender. Next - simply wait for the American occupation of Ireland and an Obama Plan for our recovery.

Genius?
PS
If CIA terrorist threat detection software is doing its job, this post may show up on their radar because I wrote "declare war on the United States" above - sorry for wasting your time. Don't worry - your national security is safe from me and my tongue-in-cheek rantings.