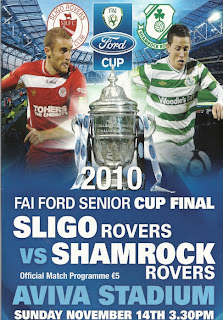 What a great advertisement for Irish football - yesterday's FAI Cup final in the Aviva Stadium had drama a plenty. I decided to head off to the match to see Shamrock Rovers vs Sligo Rovers - I was in time to beat the big queues for tickets and got a great seat on the West Stand for €10. With a crowd of over 36,000 present, it was a good day for the FAI with probably the largest crowd to see two League of Ireland teams play for a very long time.
Despite the cold (I was actually shivering near the end - I can't remember the last time that happened!) both Rovers teams served up a cracking game - all that was missing were goals. It ended 0-0 after extra-time, which of course meant penalties. I have never been at a big game that ended in penalties - there was a lot of tension all around the stadium. Sligo keeper, Ciarán Keely proved the hero by making four magnificent saves in a row - Sligo won 2-0 on penalties. As an ex-goalkeeper myself, I was delighted to see the keeper making the decisive moves. I was also pleased to see that the goalkeepers union is still active - Kelly went over to the Shamrock Rovers keeper (Mannus) for a hand shake before he was mobbed by his team mates. The whole atmosphere was great - I was closest to the Sligo fans who were very colourful and made a lot of noise. I shot the following short clip with my iPhone at the start of the match:

I used to go to many League of Ireland and FAI cup matches in the early to mid 1980s. I lived in flats in Drumcondra for three years, and it was very close to Tolka Park, Dalymount Park, and Croke Park. I haven't been at a game featuring League of Ireland teams since before 1986 (when I got married). I am making a mental note to get along to a few more.