In September 2008 I got my first ever iPhone (I'm getting an iPhone!!!) - it was a a second generation iPhone. I was very excited at the time and since then I have been using iPhones through the various generations - my current one is an iPhone 6. I broke the screen on this early last year, but never got around to replacing it. It lasted well until our Route 66 trip when I think that sweat damaged the bottom part of the screen through the cracks. Due to a dodgy battery, it was crashing and running out of power all the time. Cue - a new phone. But which one?

A new iPhone was going to cost a lost of money. Sure - I would have loved an iPhone 10, but the price put me off and I started to look at other options. I had been reading about Google's Pixel 4 due out later this year and wondered about waiting for it. However, it is expected to cost around €1,000. As part of my research I looked at other phones and came across the Pixel 3a, and have found that for half the price of a Pixel 3 (Google's current flagship phone) I would get a phone that could do everything I need, and more. 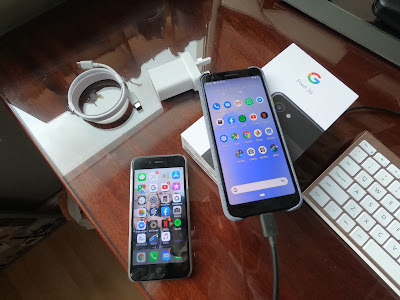 My new phone arrived today and I have been having fun setting it up. Google have a very straight-forward way to connect your old iPhone and transfer data and apps to the new phone. Not everything ported across, but I am impressed with the installation process. Once I logged into Google, everything Google related (Gmail, Calendar, YouTube, etc) was automatically installed. After 11 years of iOS, this was the first time that I had ever owned an Android device. The change in interface and how things work takes a bit of getting used too - but I am learning fast. The Pixel feels great and the screen quality is very impressive. The fingerprint access is cool, and the squeeze option to bring up Google Assistant is something I'm sure to use a lot.

Changing from an iPhone 6 to a Pixel 3a is skipping a few generations of phones, and the difference is huge. Already the Pixel provides me with a lot more features that can be accessed very easily with voice control. I never thought I'd switch from Apple to Google - apart from a brief experiment with the Microsoft Lumia phone, I have been loyal to Apple since 2008. The Pixel is the simplest to use phone that I have ever had, and I have not experienced any major difficulties so far. Goodbye iPhone, Hello Pixel!