Irish Genealogy is proving to be a treasure trove of ancestral information. Yesterday I found details about my paternal grandparents, today I'm taking a look for my maternal grandparents Paddy Byrne and Kathleen Cullen. One of the confusing things about my grandfather is the spelling of his surname - below you can see that his birth was registered as "Burns", but in his marriage registration he in a "Byrne".

First - my grandmother's birth registration. She was born on 14th April, 1911 in Dublin. Her parents were Richard and Annie (nee McCann) Cullen. Richard is listed as a Carpenter by occupation. The document shows that a "Mary Joyce" was "present at birth" in 34 Manor House. The record before and the one after Kathleen's birth are listed as the same - perhaps indicating that they were delivered by a mid-wife.

My grandfather was born in Co Tipperary and his birth registration shows he was born on 20th July 1905. His father was James Burns, a labourer, and his mother was Maggie Cobourne. The registration shows "her mark" - this tells me that she registered the birth herself, but that she was not able to write her name. In the 1911 census she is listed as "Cannot read". The address is given as "Abbeville" which is near Lorrha in Co Tipperary where they lived. 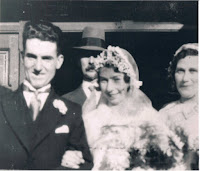 The marriage registration for Paddy Byrne and Kathleen Cullen shows that they were married on 12th November, 1933 in the Church of the Holy Family on Aughrim Street, Arbour Hill, Dublin. Paddy's surname has changed to Byrne, his father (who was deceased) is also shown as Byrne. His address is given as Villa Park House, Cabra - this area is now a more modern housing estate. His occupation is shown as "Dairying" - we know he was a milkman who delivered milk by horse and cart in Dublin. Kathleen's address is 5 Ashford Cottages, NCR (North Circular Road). This house still exists and can be seen in Google Street View. Interestingly her father, Richard Cullen, is listed as a Plasterer - he was listed as a carpenter when she was born. According to my Mum he was a master plasterer who was a carpenter by hobby. Mum still has some of his woodwork at home in Ballingate. The Best Man was Patrick Cullen - I don't know if he was a relative, Kathleen did not have a brother called Patrick. The bridesmaid was Lily McCarthy who was a neighbour from Ashford Place (later she became my Mum's Godmother). I suspect that the lady to my grandmother's left in the photo above is Lily, the man behind her looks like Richard Cullen, her Dad and my great-grandfather. The marriage ceremony was performed by Ernest Farrell CC, who incidentally was one of the founders of the Catholic Boy Scouts of Ireland in 1927. Paddy and Kathleen Byrne emigrated to Canada in 1957.