This weekend I was in Westport Co Mayo for the Confirmation of one of my in-laws. The ceremony was in Holy Trinity Church of Ireland, and I can safely say that this is one of the very few times I have been in  Protestant church. I hadn't realised that the ceremony is very similar to a Catholic ceremony. Nevertheless it was enjoyable and interesting at the same time - it was given by Bishop Patrick Rooke of Tuam, Killala and Achonry. One big difference between the Catholic and Protestant churches is that the latter have lots of interesting plaques on the inside walls commemorating Lords and soldiers. I was right beside the one below commemorating three local men killed in action in both the first and second world wars - very sad that all three were only sons. There were several others dotted around the walls - I think it is nice that communities remember their war dead like this. We should do more of this. 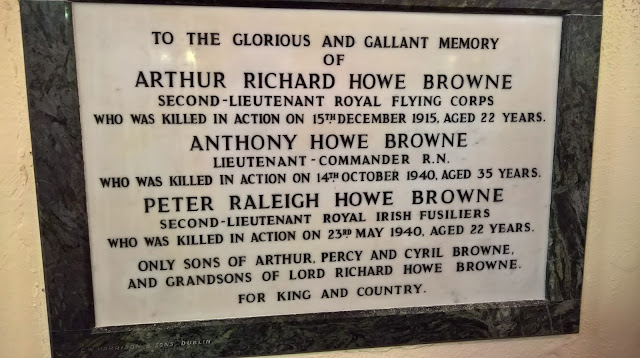