Roma and I went to see Gilbert O'Sullivan in concert at the impressive new Grand Canal Theatre last evening. The show was excellent, and a real trip down the nostalgia lane. We had seats in the fourth row and we were right in front of his grand piano for a perfect and close view of his performance. GO'S had most of his chart success in the early 1970's, so his classic songs have been around for a long time. He is now 64 years old, but has lost none of his voice or charm. Most of his songs are love songs with a story to tell - so a GO'S concert requires quite a deal of listening and concentration on the words. As a bad listener, my mind sometimes wandered - this was not helped by the presence of two beautiful backing singers! He had 11 people in support (including a String Quartet) who provided an excellent sound - acoustics in the new theatre are excellent.

All the old hits: Clair, Alone again (Naturally), Ooh Wakka Doo Wakka Day, Can't Think Straight, What's in a Kiss were delivered in great style along with a mix of excellently performed songs from his many albums, most of which I don't recall. The dreaded "Here's a song from my new album..." worked out really good - especially a funny song about being allergic (to clothes on girls, rules in school, and work) - I might even buy the new album when it comes out later this year. For an encore, GO'S finally got the audience on its feet with a rousing version of Matrimony and the highlight of the show (for me) Get Down. After the concert I bought The Berry Vest Of album with all his hits (€15 - which I thought was OK for a concert).
I had the good idea of driving in early and getting a pre-show dinner in the Crystal Boat Chinese restaurant on Grand Canal Docks. We parked in nearby Barrow Street and made the restaurant in good time. I was a bit worried that a restaurant almost right beside a 2,000 seat theatre on concert night was almost empty. The best that can be said for this restaurant is that it is take-away food at a table. There are several superior restaurants in this area - take my advice and go to these instead. 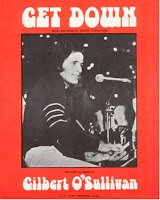 The first single I ever bought was  GO'S's Get Down. This was in 1975 (it was a hit at the end of 1973). I bought the single (45rpm vinyl!) in a Paris record shop while on an exchange with a French lad called Thierry de Pettiville (salut Thierry de Irlande - au cas où vous vous jamais Google!). We didn't buy singles in our house (later my sister Kayo did in her Bay City Rollers phase) - so it took me a long time buy my first (I only ever bought one other single - Fernando by ABBA). As my only single I played it over-and-over on our mono record player at home.
Finally, the evening was spoiled somewhat by my car being clamped - this is the first time this has happened to me. It was clamped at three minutes past ten (22.03 on the ticket) - the zone had a Pay-and-Display sign for 07.00-24.00 which I did not see. In fact it never occurred to me to even look, or be suspicious why there was a free space within short walking distance of a theatre. I did not even think to look - the €80 release fee will make me more careful. I could moan about the injustice of being clamped in a quiet area at ten o'clock on a Saturday night, and the disproportionate fine of €80 for not paying a €2 parking fee, but nothing makes you feel more stupid than sitting in your car waiting to be de-clamped (they came within 15 minutes). This, on top of my recent penalty points and a close shave last week in avoiding a parking ticket at 08.55 in Blackrock, is clearly showing that I am "losing it". Nobody told me that when I turned 50 that all of a sudden I would break a spotless (not counting a summons in the early 1980's for no light on my bicycle) record on the road. As GO'S might say (sing) - I'm a Writer, not a Fighter, so I'll just grin and bear it, and try harder the next time....
Told you once before, and I won't tell you no more,
So pay your fee, your fee, your fee,
Pay the Corpo with a pound (euro doesn't rhyme)
Or you'll be Out of Bounds
(with apologies to GO'S for murdering his Get Down lyrics)!