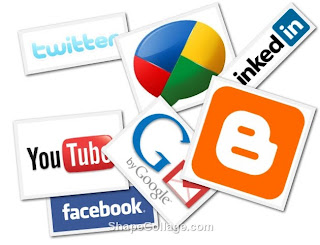 I have been experimenting with linking up some of my Social Networking and on-line presence tools with one another. In addition to Blogger, I also use Twitter, Linkedin, Gmail, YouTube, Buzz, and more recently, Facebook. First - it's hard to keep track of everything (and my presence on-line is modest compared to most people I know). Post something on Blogger, and later check out what someone else is doing on Twitter, followed by checking out who is active on Linkedin - it gets awkward. Sometimes I will have Twitter, Linkedin, Blogger, Buzz, YouTube, Gmail, all open at the same time - but mostly I just have one-or-two open at a time. It is also quite diverting to have so much going on when you are trying to get some work done.

Lately, many tools are offering to link with other tools. Already - if I post something on Linkedin, it also shows up on Twitter (and vice versa). Much of what I do on-line is also updated on my Gmail, and any comments I get on my blog and on YouTube also show up in my Gmail Inbox (thanks to all for your comments). This is a convenient way of checking what's happening on-line.

Today I have linked this blog with Twitter (through Twitterfeed). This is a service which allows you to automatically "feed" your blog to Twitter, Facebook, and several other services. So, when I post here on Blogger - there should be an automatic post on Facebook and Twitter (through Twitterfeed). I think Google Buzz is an attempt to do all of this at once - it even posts when you add an image to Picasa.

Very soon many of us will have an increased on-line presence - many friends, colleagues, and my students use Bebo, MySpace, Facebook, YouTube, Gmail, Linkedin, Twitter, Blogger, WordPress, Buzz, Flickr, Picasa, and lots of other tools. There will be an increasing demand to provide tools to manage people's on-line presence through a single interface. Our lives will get more complicated as we sign up for the Next-Big-Thing - if you are like me you will have multiple accounts with on-line services, sometimes with different username and passwords. Just stop and think for a moment how many Internet services you are registered for - how do you manage them all?

Finally - today is the 31st of March (which is my Dad's birthday - hope you had a great day Dad. Love you lots). I note that this post is the 22nd post I have made this month which is the most for any month since I started using Blogger. My previous highest was 20 for February of this year. (Too much time on my hands I hear you say!). With the odd exception, almost all of my posts are written in the evening or at the weekend  (it is almost mid-night as I write this). Sometimes I write several posts for publication later, and finish them off during the day at work during a break. So if you think I'm skiving off work (and some of you do!) - think again.

Email ThisBlogThis!Share to TwitterShare to FacebookShare to Pinterest
Labels: blogging