14th July – A day of history and a close run thing

Today I slept until 8.00 – late for me even during the holiday. After breakfast in the hotel I decided to check for local Harley-Davidson dealers in Portsmouth who could look at my brake cable problem. I found “Dallas Wright”, an after-Harley sales dealer, which was only a few streets away from my hotel. He looks at the brakes and pointed to the completely worn break pads as my problem – but he was satisfied that I would get back to Ireland. As planned I went down to Portsmouth Historic Naval Dockyard for a quick visit. I looked around HMS Warrior, which is a magnificent battleship that was never used in anger. The highlight however was HMS Victory – this is an impressive vessel close up and must have been terrifying to the many French and Spanish sailors who were fired on from it. Every space inside seemed to be used with room for the impressive Admiral quarters for Nelson. Everything was a bit squashed and most of the sailors would have had to stoop a lot to get around the ship. Definitely worth a visit again. Henry VIII’s Mary Rose warship was a bit disappointing – it is difficult to see as it is in a darkened store and is constantly being sprayed. By now I was feeling the time and decided to get on the road. I stopped off at a bookshop and bought a biography of Nelson by Andrew Lambert – Nelson: Britannia’s God of War.
It felt good to be on the road again, though I had to do some mental calculations to see if I was in good time to get to Fishguard for the ferry at 18.30. It was 13.00 leaving Portsmouth – I had 4.5 hours to cover 265 miles. At an average speed of 65 mph I should make it on time. I made good progress and stopped for petrol twice. Despite making a wrong turn in Fishguard I was on time for the ferry – but only just. It was 18.15 when I boarded. The ferry crew started to close the door before I got off the bike. When I left the car deck to go up top, the ship had already left the port. Five minutes later and I would have missed the boat – Phew!

I had decided to call into Mum and Dad on the way to Dublin, but as the ferry was a later sailing than originally planned – this meant that I would not get to Ballingate until 21.30 – very late. I took up Mum’s offer to stay over – I guessing that it is at least 15 years since I last stayed in this house. We went to meet Joe in Conway’s pub in Kildavan for a couple of pints of Guinness – ahhhh!, they don’t make beer like that in France!

A relief to be here after all my troubles on my trip. One last stage to go – to Dublin. I’ve decided to go via Uncaged in Arklow tomorrow to get them to look at the brakes – I also need a new front tire. Then home. 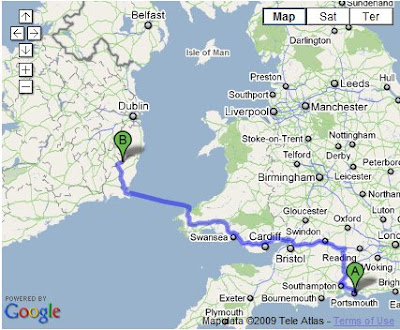