I got up early after a bad night’s and left the hotel at 7.15. Nobody was up so I rolled the bike down a hill away from the hotel before starting it. There was a fine drizzle that meant wrapping up well, but it got no worse than this though it slowed me down. I was worried about petrol before setting out as I had 95 miles covered since my last fill-up. According to my old map I would be going through old roads and at that time in the morning I was worried about where I would get some petrol. At 144 miles on the clock the main tank ran out and I switched to the reserve tank. Not knowing where the next filling station was I slowed to 50mph to conserve petrol. Fortunately the road remained as a motorway and I came across a filling station with 161 miles on the clock. It took just over €30 to fill – by far the most I have ever paid for in one go (usually €20 to €25). The bike was probably running on the smell of petrol at that stage (I spent €80 on petrol today!). I had lost quite a bit of time.

I broke every speed limit on the way to Cherbourg, but was late by about 20 mins – arriving at 12.50. Fortunately M. Bockmann, Honorary Consul of Ireland, had stayed and he gave me my Emergency Passport. Another problem sorted – things are looking up.

I had a quick lunch in Cité de Mer and headed back towards Caen. I stopped at the German War Cemetery at La Cambe where there are 21,000 German soldiers buried. The cemetery has a “Work for Peace” theme and one cannot look at this peaceful setting and think otherwise.

Just past the cemetery I spotted a sign for “Vergers de Rouilly” which sold calvados, cider, and pommeau directly from their own orchards. I tasted some calvados and pommeau and bought a bottle of each – excellent!

I still had some time before continuing on to the car ferry in Ouistreham so I decided that I had time to stop at the American War Cemetery/Memorial at Arromanche. I was surprised at the increase in traffic as I got closer and then astonished at the amount of people who were visiting the site. There had been just a few people at the German cemetery and nobody at the Canadian cemetery two weeks ago. There is a big car park and there were people everywhere – and not many Americans that I could see. While I knew that I could not stay long, I still saw the small white crosses – nothing prepares you for white cross after white cross after white cross. I also saw Omaha Beach and couldn’t help thinking of the terror that each of the Americans buried there must have felt. On a cold and wet June morning after months of training they braved sea sickness and the unknown only to be shot or blown up on this beach, and then buried close by in what has become a tourist attraction. I felt a bit of a voyeur and that I was the invader here.

I looked at my watch and realised that I was cutting things a bit too fine. I still had 45 km to go to Caen, but I couldn’t remember how far Ouistreham was after this. I made the ferry with about 15 mins to spare. The girl at the check-in wouldn’t accept my emergency Passport, but a supervisor OK’d it for her. Phew! Going up the ramp of the ferry (the Mont St Michel) my front brake cable felt like it snapped, but I was able to get on board OK – Phew!

The ferry crossing took six hours and I read the Sunday Telegraph from cover to cover. I bought some more calvados and pommeau, plus a bottle of cider for my Mum and Dad whom I hope to see on my way from Rosslare to Dublin tomorrow. 32 years ago in 1976 I did the same after coming home from a French exchange.

It is now mid-night and I am finishing a pint of ale in the Ibis Portsmouth hotel bar. Tomorrow I will check out the brake cable first and hopefully get to see HMS Victory as well. It has been a long day – I rode 410 miles (648 km) today and I can feel it in my ass! 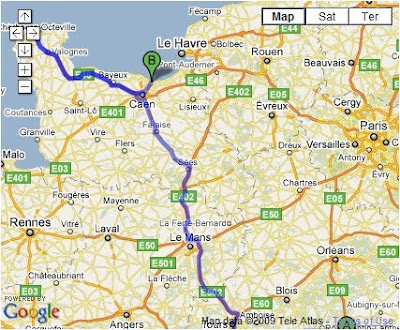