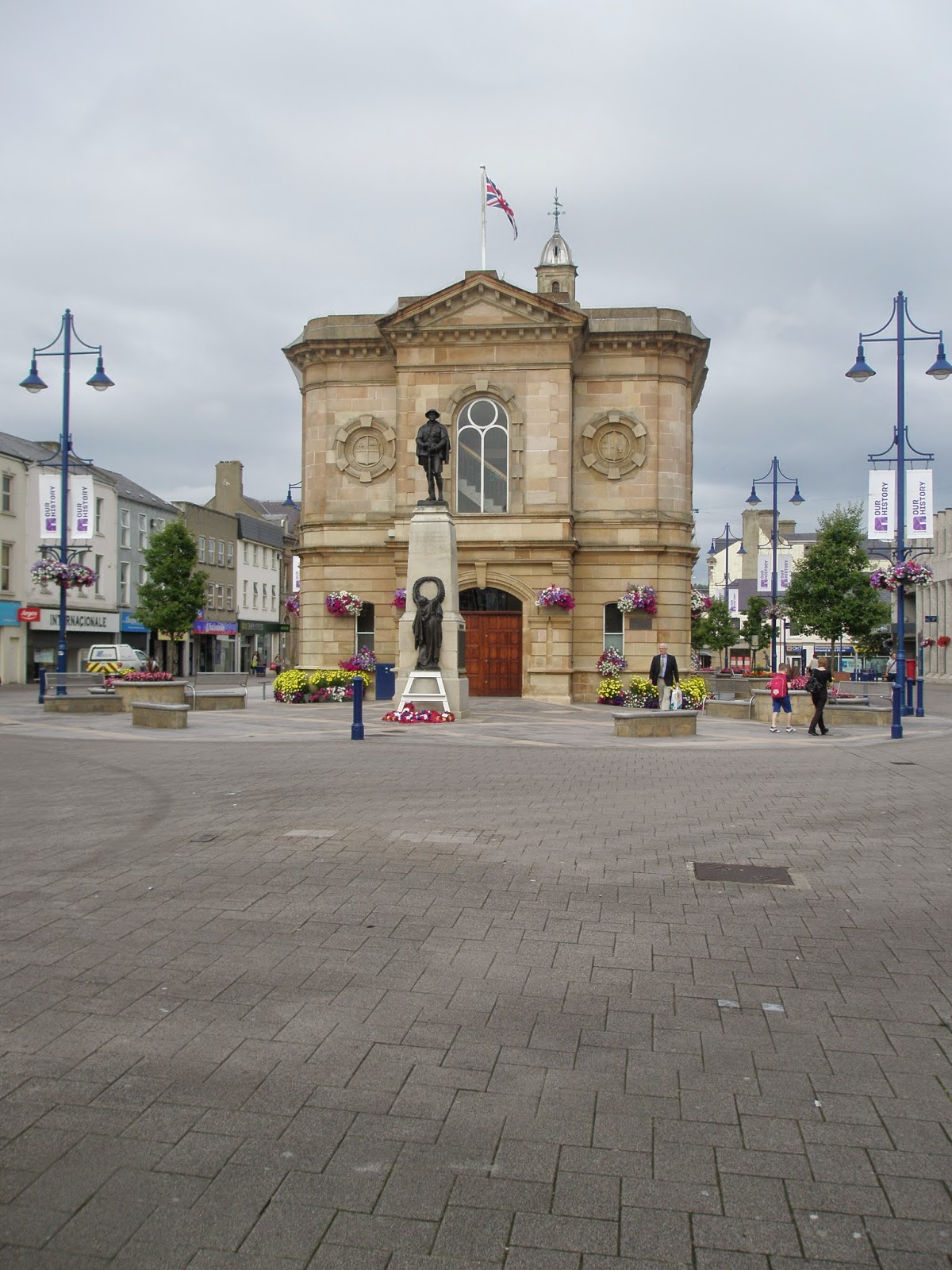 I stayed at the Premier Inn in Coleraine on my first night in Northern Ireland - nice, comfortable, and cheap. I decided to breakfast later so I set off to explore the Centre of Coleraine again. There were a few more people about, but it was still very quiet for 9 o'clock in the morning. In the town centre is a fine Town Hall with a war memorial in pride of place. There were many names on the memorial to the dead in both world wars. It was a feature of Northern Ireland that there were memorials like this in almost every town I passed through - something we see very little of in the south of Ireland. It was still too quite for me and I decided to move on to Portstewart. 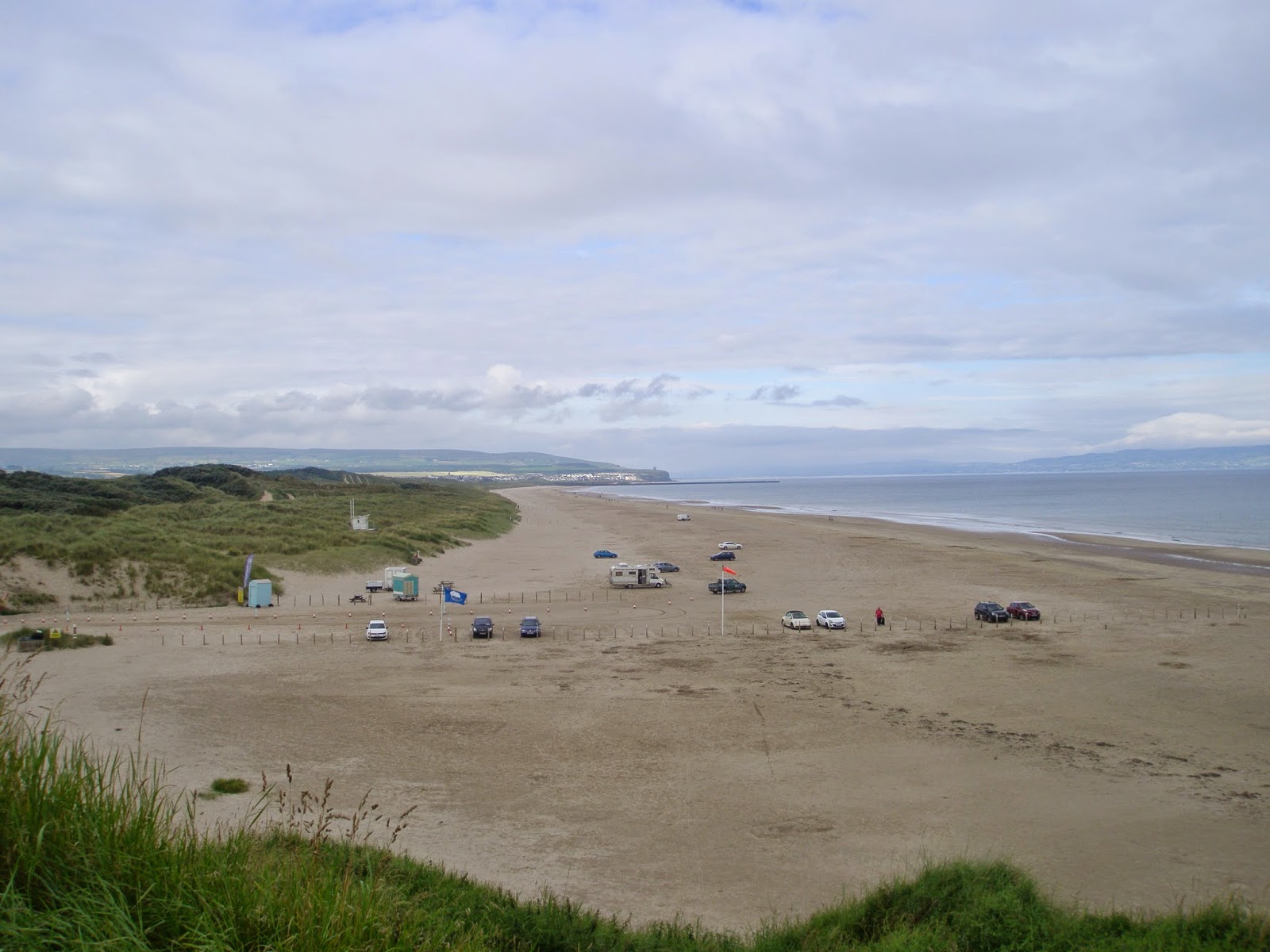 I stopped for a coffee and croissant at the Griddle Bakery and then rode through the town to the magnificent beach. While there were a few cars parked on the beach I dared not ride my bike onto the sands, so walked instead. You can see back to the Messenden Temple from here and lots of locals and holiday makers were out for a walk this early in the morning. A fantastic amenity to have on your doorstep. Portstewart is a lovely seaside town, and the equally lovely town of Portrush is close by. It's a nice town to walk around and I looked at the war memorial (with a statue of the figure of Victory with a sword in one hand and a palm branch in the other). and also came across the interesting brick sculpture in the Antrim Gardens which depicts local history.

Dunluce Castle is one of the most photographed ruins in Ireland, which is not surprising given it location on a rocky outcrop. The castle dates from the 16th century and fell into ruin when part of the kitchen collapsed into the sea. It was home to the colourful Sorley Boy McDonnell who was a constant thorn in the sides of the English and Queen Elizabeth I during the 16th century. There were a few hundred people out and about the castle with I'm sure thousands of photos being taken.

After the magnificent ruins of Dunluce I moved on to town of Bushmills, best known as the home of the whiskey of the same name. I visited the shop and treated myself to a bottle of the Distillery Reserve on which you can have your own name printed on the label. I didn't tour the distillery as I was informed that many of the items on the tour were not open today. In apology I was given a free small bottle of Bushmills Irish Honey - Yum!

Shortly after leaving Bushmills I arrived at the world famous Giant's Casuseway. It's hard for me to believe that at 54 years of age and living in Ireland all my life that I had never been to the Causeway before. What a magnificent sight I have been missing! It was mid-morning when I arrived, but there were already hundreds of people there. The very kind car park attendants looked after my bike and all my gear so that I could walk down the (lengthy) path to the Causeway without having to carry everything. I walked right out to the end of the path past the "organ pipes" and loved every second of my time there. I took over 100 photos - here's one "selfie" I managed with my Canon EOS: 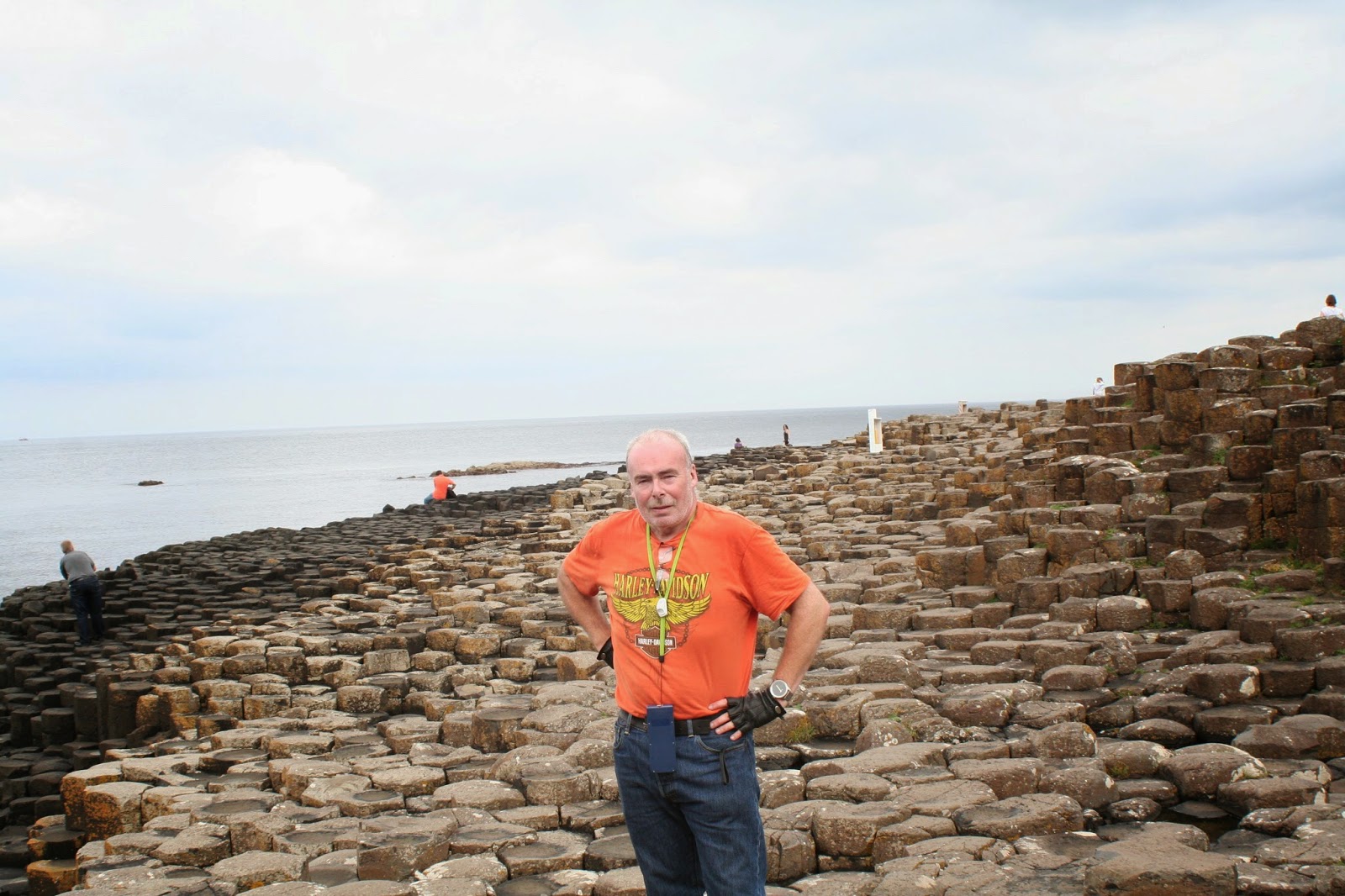 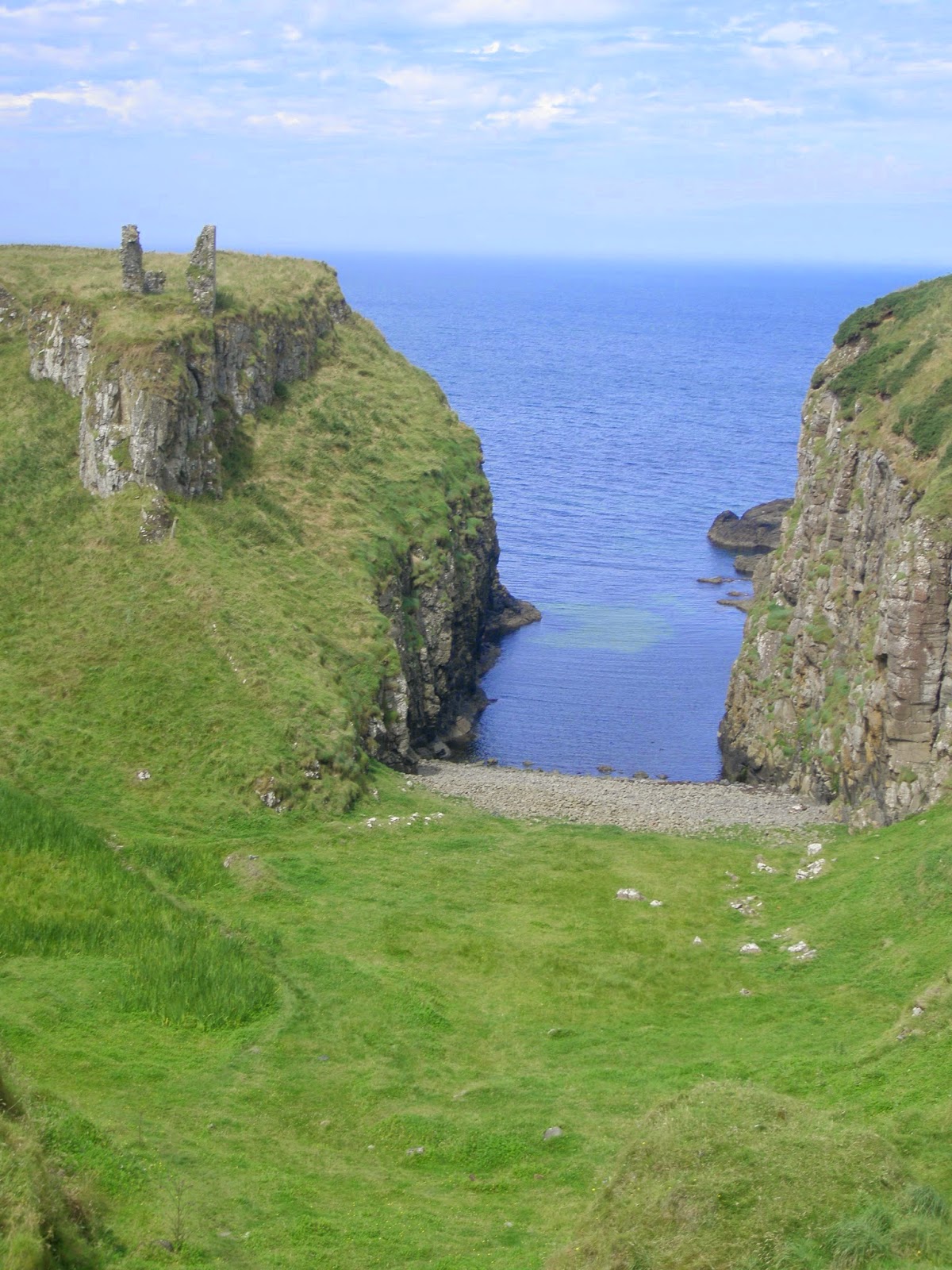 Everything else in Northern Ireland on this trip could not possibly be as glorious as the Giant's Causeway, but nevertheless I had to leave it and move on. A short distance away are the ruins of Dunseverick Castle where St Patrick himself is reputed to have visited. The castle was captured and destroyed by the Cromwellian General Robert Munro in 1642 - all that's left are the ruins of the gate lodge for the castle. Its location beside a small bay makes for an interesting photo.

There is one more spectacular site on this part of my trip and it is the Carrick-A-Rede rope bridge. Even though there were quite a few bikes, this area was not supervised as at the Giant's Causeway and I had to carry my heavy leather jacket all the way to the bridge and back. This location was also very busy and while I remember it for the wonderful bridge, I also remember it for the queues - one to first cross over the rope bridge, and one to get back. Some tourists walked across the bridge and immediately turned around to queue to get back. All this took quite some time, but at least the scenery here looking north to Rathlin Island and the Mull of Kintyre in Scotland beyond is spectacular. 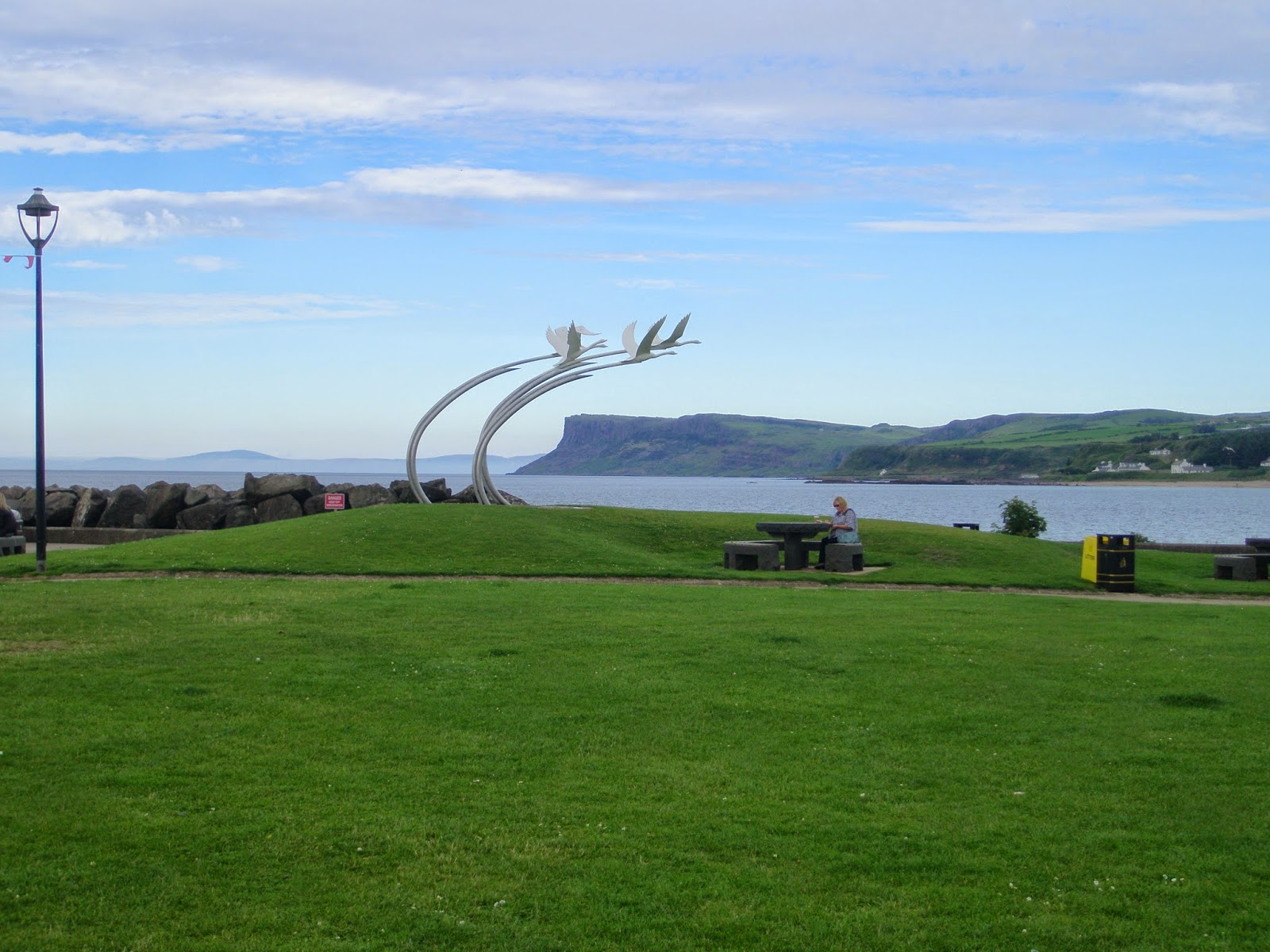 My final stop in this section of my tour was in the town of Ballycastle where I stopped at the Marine Hotel for a late lunch. Here I had what must be the best seafood chowder EVER created. Ballycastle looks out to both Rathlin Island and to Fair Head and is a busy town today. Thankfully I could park my bike on the footpath as car parking seemed to be a bit of a problem.