In the first of a short series of posts about my recent trip around the Northern Ireland coastline I set out from Dublin to travel first to Muff on the Derry/Donegal border for an "official" start, and then through Derry City to end the day in Coleraine. This was a total distance of about 80 kilometres.

The first port of call was at Culmore Point where there is a Tower house where the Lough Foyle Yacht Club is based. This is a busy part of Lough Foyle where shipping passes in the narrow channel at this point. Next, I was excited about visiting Derry as I had never been in the city proper and had only previously passed though it on two occasion on the way to and from Donegal. Here I stopped at the Tourist Information Centre on Foyle Street where the helpful staff gave me lots of material for my trip. Outside the centre a guide persuaded me to go on a City Walking Tour, and suggested I leave all my gear and the bike at the Tourist Centre (where it was safe).

Our guide was a Derry man named John, who was most informative. We started at the Ferryquay Gate and he told us all about the difference between Londonderry and Derry names for the city, and about the foundation of the city. Up on the walls he showed us the Loyalist Fountain area and the Nationalist Bogside. The walk around the complete walls is fascinating - we did not do the full circuit as we passed through "The Diamond" before finishing this very worthwhile tour. Following this I returned to the bike and rode down to the Bogside and the famous "Free Derry" corner - this is often used for campaigns and today it had a message about Sarcoma Awareness. I also took a walk over the new Peace Bridge. Even though Derry is now a thriving city there is no doubt that divisions still exist between Nationalists and Loyalists.

Leaving Derry I made my way out to Magilligan Point where there is a Martello Tower overlooking a lovely beach and of course across Lough Foyle to Donegal. There are many Martello Towers in Ireland which are named after a fort at Mortella Point in Corsica which successfully withstood bombardment from the Royal Navy in 1794. The British were so impressed by the strength of the tower that they copied its design and built over 200 of them around the coast of Ireland and Britain. This one was built in 1812.

One of the "must see" sights in Northern Ireland is the Mussenden Temple near Castlerock. This was built as a library and modelled from the Temple of Vesta in Italy. It is part of the grounds of Downhill Demesne and Hezlett House, and it is perched on the edge of the cliff overlooking Donegal to the west and Portstewart to the east. I lost my gloves here only to find that they had been placed on the handlebars of my bike back in the car park by the honest finder! 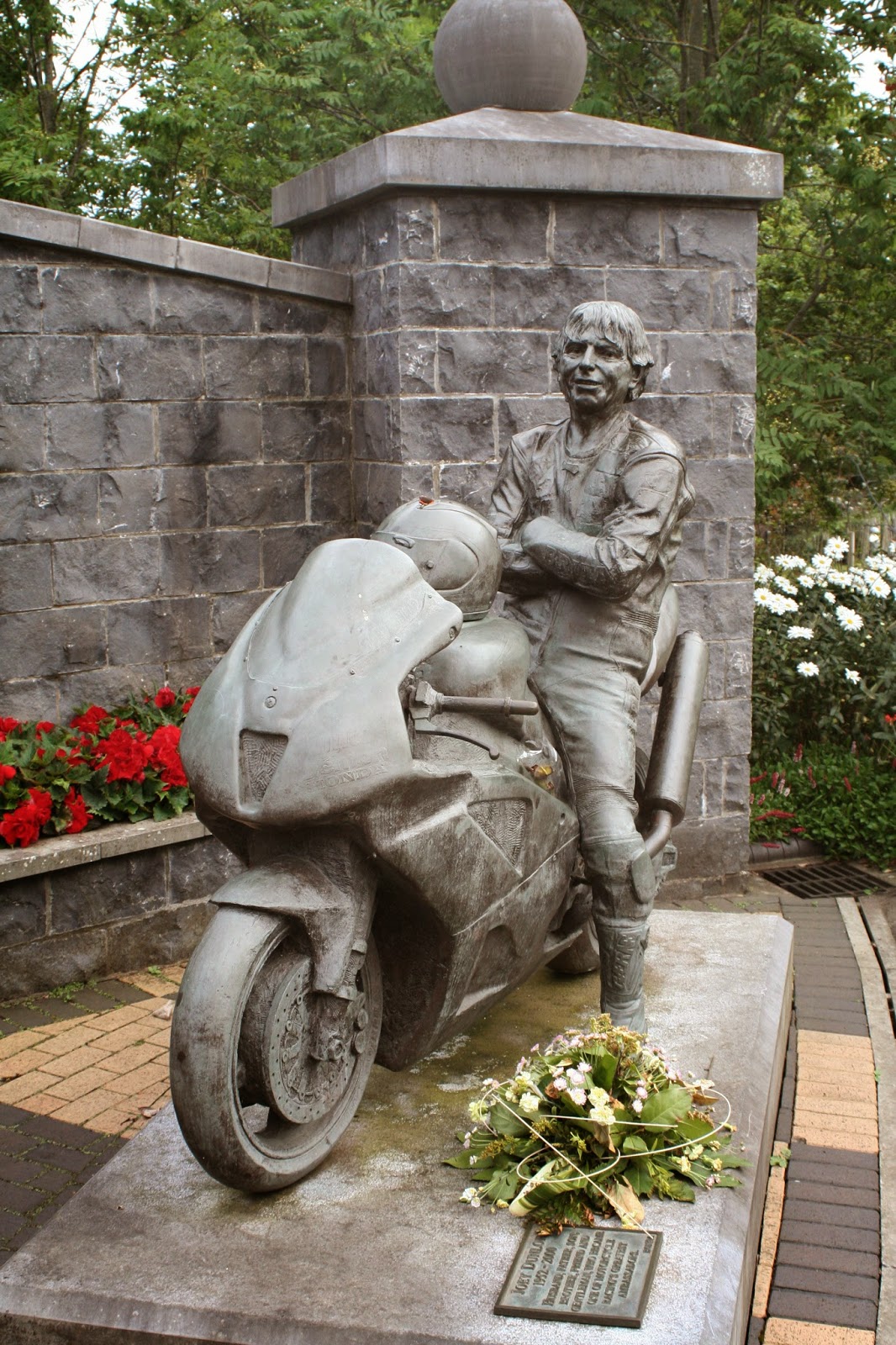 Before finishing up for the day I decided to detour from the Causeway Route to Ballymoney to see the memorial garden dedicated to Joey and Robert Dunlop. There is a super monument of Joey riding on his racing bike, with a wall  beside listing his famous wins. Dunlop died in Tallinn, Estonia, in 2000 while leading a 125cc race aged just 48. Robert Dunlop died during a practice session for a race in 2008.

While today's trip around the first part of the Causeway Route was relatively short, I did not make it the hotel in Coleraine until about 8 o'clock. The ride from Dublin took up the morning, and I had also spent a long time in Derry and at the Mussenden Temple. Coleraine is a very quiet place in the evening - the town centre was almost empty. There was no where to drink or eat in the centre and I asked a local man where to go. He showed me the way to a pub where I was allowed to eat a takeaway pizza. It was a Monday night, so I guess most places would be very quiet, but this was the quietest town I had ever been in during the early evening.