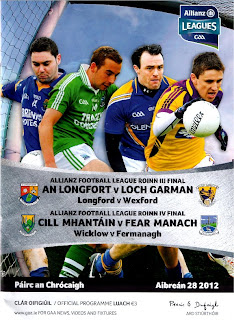 Today was a special day for Wicklow natives, as the county's GAA team took on Fermanagh in the Allianz National League Division 4 final. The game was played in an almost empty (and very cold) Croke Park where about 7,500 watched this game and the Division 3 decider between Wexford and Longford. I decided to watch both games and wore my "Wickla" jersey, but also had a Wexford scarf to show divided loyalties - the townland of Ballingate where I grew up is the last one in Wicklow before entering Wexford on the Carnew to Bunclody road.

It was strange to be doing this...

...though I was reared in Wicklow I have lived in Dublin since 1978. Any time anyone asks me where I am from I say "Carnew, Co Wicklow" - and have the county's GAA jersey to prove it. I took the train to Croke Park and passed thousands of rugby fans attending the Ulster vs Edinburgh match in the Aviva Stadium - the biggest game in Dublin this weekend.

Wicklow were worthy winners, though for the first few minutes at the start they were outplayed. But once we took the lead with a Seánie Furlong goal, Wicklow were never really in any danger of losing as a poor Fermanagh side could not break down Wicklow's defence or cope with Furlong.


In the second game - it was a "game of two halves". Longford raced into a huge 1-10 to 0-3 lead by half time and looked to have the measure of an extremely poor Wexford effort. The second half was a bit different as Longford could only manage two points while Wexford dominated. Five more minutes and Wexford would surely have won.

A great day's football, and a day for Wicklow people to feel proud. Former Wicklow GAA County Secretary (and my Grandfather) PJ O'Loughlin would have loved this!