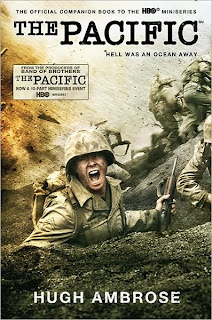 I have just completed reading Hugh Ambrose’s new book The Pacific, based on the lives of five men and their experiences in the Second World War fighting the Japanese in the Pacific. The Pacific is also an HBO 10-part miniseries which I watched on Sky before the summer. On TV this was a Saving Private Ryan type of experience with a lot of action and graphic detail of death and destruction during the fighting. The TV programme is based on the lives of marines Eugene Sledge, Robert Leckie, and John Basilone. The book is slightly different in that while it features Sledge and Basilone – it almost totally omits Leckie (for which Ambrose both justifies and apologises for), but also concentrates on Austin Shofner, Vernon Micheel, and Sidney Phillips. This works quite well in that Ambrose states that it was not just the Marines who won the war in the Pacific, but other parts of the US armed forces as well.

Ambrose’s accounts of Sledge and Basilone in the war are very similar to the way they were portrayed in the TV programme – these were two extraordinary men, and Ambrose paints a picture of bravery and devotion to duty that is both horrible and astonishing. Their experiences were horrific, Basilone (awarded the Medal of Honour) dies on Iwo Jima, but Sledge survives, having participated in some of the most vicious fighting of the war. It’s hard to imagine that Japan and the USA fought such savage battles only a generation ago.
While Sidney Phillips is a minor character in the TV programme, he features more in the book. Phillips, Micheel, and Shofner are perhaps more interesting to read about as their story is not covered on TV. All five men are fascinating and brave characters – they are almost hero worshipped by Ambrose who is clearly in awe of the marines and their fight in the Pacific. There is no sympathy for the “japs”, who were in a different way just as brave as the marines.
The book has a “thrown together” feel – it is very “bitty” and jumps around between the different characters far too much. I would have preferred a longer run for each character (as in the TV series), rather than the constant switching back and forth. One thing is clear though – this is an incredibly well researched book. For a book of a modest 449 pages of script, there is an astonishing 1,072 references. There are also quite a number of footnotes, many not needed in my view, and also some annoying repetitions throughout. Apart from these minor aberrations, the book is a worthwhile read. If you have not seen the TV series, make sure you do so as it will give an even better idea of what the men of The Pacific endured.