Google boss Eric Schmidt warns on social use of media

Somewhere in the USA right now is a teenager who in about 25-35 years time will be President of the United States of America. No doubt this kid will have a Facebook page, watch YouTube, play games on-line, look up naughty websites - i.e. he/she is being a teenager right now! There might even be people monitoring their activities right now (think sons/daughters of existing politicians, or school class representatives).
BBC News on-line reports that "Google boss Eric Schmidt warns on social use of media". He predicts that many young people of today will change their names "in order to escape their previous online activity". He further states that Google already knows "roughly who you are, roughly what you care about, roughly who your friends are". There are even Internet companies who can clean up your profile for you! Social media consultant Suw Charman-Anderson states in the same report that "As a society, we are just going have to become a bit more forgiving of the follies of youth". 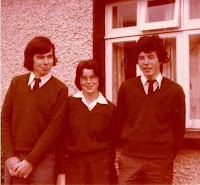 I think we all have some things that we might like to airbrush out of our past. I have very few photos of myself as a child, and only a handful of when I was a teenager. My photo album has exactly 26 printed photos of me between the ages of 0 to 19 years old. Here's one of the 26 taken in 1978 showing me (18 - who's that hairy hippie?) with my sister Kayo (16) and my brother Joe (17) in our FCJ Bunclody school uniforms. No videos or film of exists of me that I know of, and certainly there are no social networking sites with silly posts and pictures of the latest party I was at. I'm satisfied that there is no incriminating photographic evidence from my past. Certainly, we partied hard when I was young, but I hardly ever saw a camera of any type - unlike today when there can be hundreds of photos and videos taken at even a modest party.
It's a sobering thought that something you write today as a youth could be used against you in years to come. Certainly in the USA there is a track record of digging up something from the past on a candidate's rival as part of negative campaigning. So a warning to American teenagers (and all others for that matter) - if you want to stand for election in 2040, make sure that you delete the flag burning and pot smoking photos right now. Somebody might be watching you!