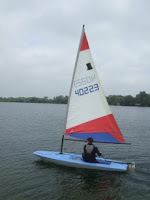 Yesterday I had my first sailing lesson at the Irish National Sailing School. This course runs on the syllabus of Irish Sailing Association/Royal Yachting Association Level 1 and is aimed at total beginners. There were five people (Deirdre, Susanne, Marco, Leon, and me) in our class which was ably led by Brian - none of us had had sailing lessons before so I was in good company. We were first kitted out in wetsuits and life jackets and taken to a classroom for some theory. This was about the wind and Beat, Reach, and Run - the class lasted about 5 minutes and we were brought to our boats. The boat I had for the day was an eleven foot Topper - like the one in the picture here (that's not me in the boat). After we set the boats up it was into the water and we were sailing! We learned the basics - one of the first things I learned after about five minutes was how to right the boat after I was rammed by one of my classmattes and it capsized, dumping me into the waters of Dún Laoghaire Harbour. This was the first of four times I fell into the water during the day.

While the day was beautiful there wasn't much wind - just a gentle breeze. This was fine for getting used to the boat, but after a while it would have been nice to have a slightly stronger breeze. However, we had a great time learning the basics of jibing, tacking, and directing the boat - this was good fun. We had lunch in The Purty Kitchen - seafood of course! After lunch it was more sailing - we practised running and zig-zagging around marker buoys. It was also a bit cold.

One thing I wasn't expecting was that I would have sore legs the next day - the Topper is a small boat and I was kneeling down for most of the day. I was tired at the end of the day, but definitely worth it. I'm looking forward to the second part of the lesson tomorrow evening. I definitely like sailing and would like to get my own boat - hopefully for next year. I can picture myself sailing off the coast at Skuna Bay in Wexford.