How To...Create a Pareto Chart in Excel

I have added a new video to YouTube to describe how to create a Pareto chart in Excel 2003. For my Business Systems Analysis module in NCI I have a Pareto Analysis exercise, and I had previously created a Word document showing the steps using screen shots. Now I have a video doing the same - I will link to this from the course resources page on NCI's Moodle LCMS so that future students who prefer to watch rather than read can learn how to create a simple Pareto chart. 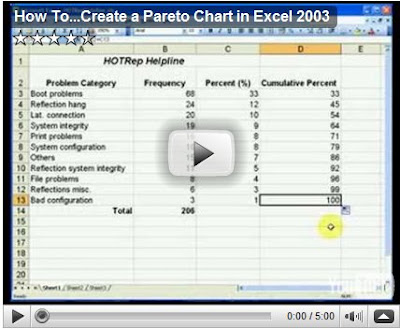 A Pareto chart is based on the Pareto Principle (named after Vilfredo Pareto) - it is more commonly know as the 80/20 rule, ie - 80% of problems come from 20% of sources.