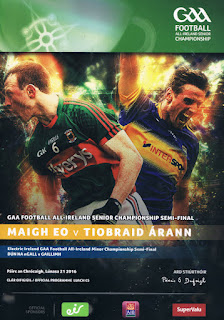 Today's All-Ireland Semi-Final saw an unusual match-up between Mayo and this year's championship surprise packet - Tipperary. I had been at Tipp's previous brilliant win over Galway and I was looking forward to a feast of football. Sadly, my daughter Kate and I did not get this in a sometimes scrappy and niggly match. The game was won and lost near the end of the first half when Mayo scored 1-7 lead by the brilliant Andy Moran. Tipp had no answer. But to their credit they made a game of it in the second half when Mayo were really poor. A fluke of a goal by Conor O'Shea settled the match. Tipp can hold their heads high in that the predicted cricket score did not materialize.

I'm going to the Kerry - Dublin semi-final next week hoping for a better match. On today's performance neither Dublin or Kerry should have too much trouble in extending Mayo's 65 year wait for an All-Ireland title to 66 years. Tipp put it up to Mayo with direct running and a brave gutsy performance. The better team won - only just.

I love going to "Croker" - enjoying the game with Kate was my highlight of the weekend. Later we had a beer in Yamamori on Ormonde Quay where we were joined by Roma and Claire. A lovely end to an enjoyable day at the hallowed grounds of Croke Park.