During the week I made the long walk during lunch hour to Arbour Hill Cemetery where 14 of the executed leaders of the 1916 Rising are buried - I had never been there before and I felt I should not let the centenary of the Rising pass without paying a visit to this hallowed ground of Irish history. 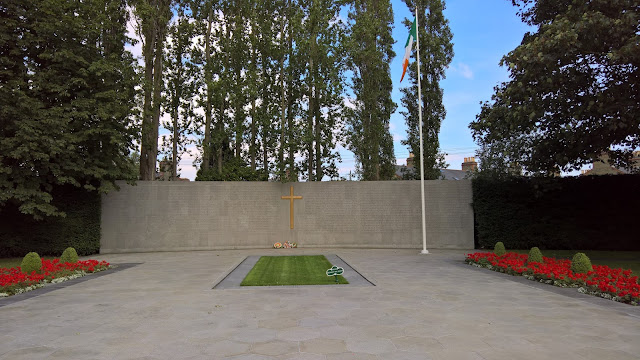 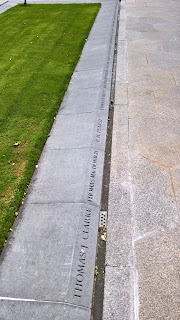 The 14 leaders were executed in Kilmainham Gaol and then their bodies were transported to Arbour Hill, where they were buried in quicklime. The graves are located in the centre of a terrace made of Wicklow granite in what was once an old prison yard. They were buried here by the British in quicklime to prevent the bodies being dug up at a later date and the location becoming a shrine of rebellion. The grave site is surrounded by a limestone edging on which their names are inscribed in Irish and English.

The 1916 Proclamation is carved in stone in both Irish and English on a curved wall at the back of the grave site. This was created by sculptor Michael Biggs - it took him four years to do the work which was completed in 1964. A gold coloured cross marks the centre of the wall. It is sad (for me) that if this garden/memorial was being created today it probably not have a cross, or at least there would be much debate about a symbol like this being used. Our tricolour (rightly) flies above the graves. This is a peaceful place that 100 years after a hole was dug in the ground still breeds pride in Irish people. Close by there is a plaque with the names of other people who were killed in the 1916 Rising.

While Ireland would certainly have gained independence later in the 20th century, we still owe a great debt to the 14 rebels buried at Arbour Hill. I hope it continues to be a shrine to Irish freedom for hundreds more years to come.