From the Eileen Ryan Collection...


Posted below are pages 5, 6, 7, and 8 from Erskine Childers' "Clause by Clause" pamphlet comparing the Anglo Irish Treaty with Éamon de Valera's Document No. 2. Dev's version is very straight-forward and requires no explanation from Childers in pages 5, 6, and 7. On page 5, the Treaty envisages an Ireland with the same status as Canada with some powers (that could be vetoed by the British) delegated to an Irish Government. Law would still be at the behest of the British with Irish litigants having to "look to England for justice in the last resort". Dev just states that the "Irish people alone" should make its own constitution and laws. He even proposes a "President" instead of authority being derived from the "King of England".

On page 6 there is an interesting piece about the name of the new country - the British justify the name "Irish Free State" largely based on similar precedents like the Orange Free State in South Africa. Dev again gets it right and simple - "Eire : Ireland". Page 6 continues with how a Governor General is to be appointed - again using Canada as an example. Interestingly he would not be bound to "even ask" advice on appointments. The hated Oath of Allegiance is stated in full - Childers refers to it (top of page 8) as a "triple oath, padded and disguised-a thrice-bitter pill with a little jam". Dev again gets it right for me with simple "No English Representative in Ireland" and "No Oath of Allegiance" statements.

Page 8 begins a discussion on the word "Association". This section of the document sees Ireland as being an integral part of the British Empire, while Document No. 2 sees us "In all internal Irish affairs Ireland is an isolated Republic", though it does recognise some relationship with the Empire in matters of "common concern" such as "Defence, Peace and War, Political Treaties".

Though this pamphlet by Childers is blatantly propagandist, and I am only half way through it, I can't believe the Dáil voted for the Treaty and against Document No. 2. No wonder a Civil War was precipitated by this. 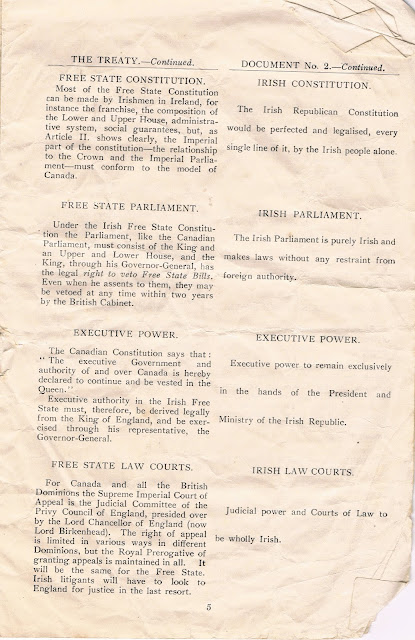 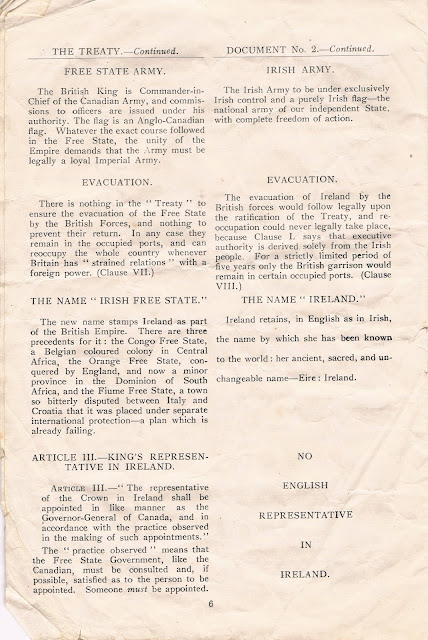 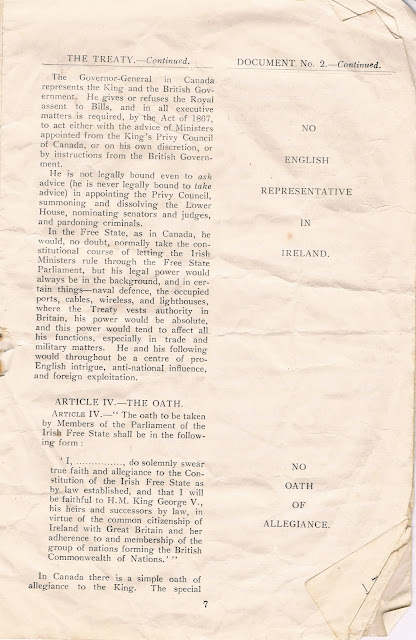 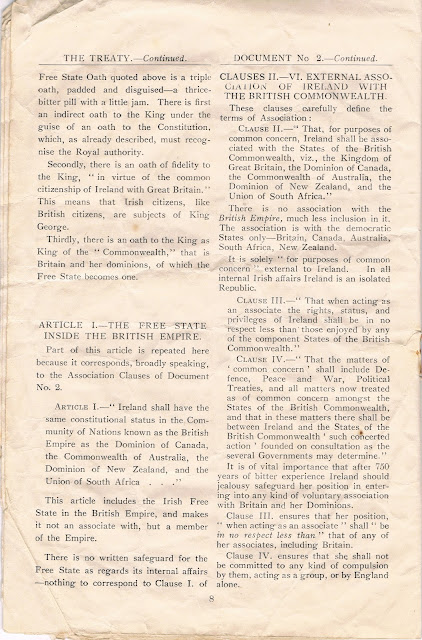