The first game of football I ever watched on TV was the 1968 European Cup Final between Manchester United and Benfica. I must have seen United hundreds of times on TV since then - Arsenal too. I had never been to Old Trafford in Manchester and I got a treat today when my brother Brian took me to see the Premiership game against Arsenal. A full house of over 75,000 fans saw an excellent games with five goals and lots of good fast exciting play. We had great seats behind the goal (just where I am standing in the photo below), and a great view of three of the goals (including two by Man Utd new boy - 18-year old Marcus Rashford). Many of the stars of Premiership football were on view: Mesut Ozil, Theo Walcott, David de Gea, Petr Cech, Danny Blind, Danny Welbeck, and Alexi Sanchez. I had never seen so many millionaires in one location in my life!

Old Trafford certainly puts on a show - everything is done with a sense of occasion. You get an impression of how important all this is when you are patted down by security guards before going in, there are many different languages being spoken all around the ground, and the noise and atmosphere inside is fantastic. We had a lot of "experts" around us who were mostly entertaining, though some behind us provided a running commentary throughout. All around us were passionate Man Utd fans and it felt to me as if they were kicking and heading every ball with their idols. We had to stand throughout the match even though we were in an all seater stadium. This wasn't too much of a problem as the space between the seats is tiny and uncomfortable.

On the flight home I sat beside a man who had brought his very excited young son (I'm guessing he was about 9 or 10) to the same game. He had a Man Utd jersey on and, like me, it was his first time to go to Old Trafford. I was 9 years watching George Best and Bobby Charlton in the European Cup on the TV in 1968. Addicted to football! 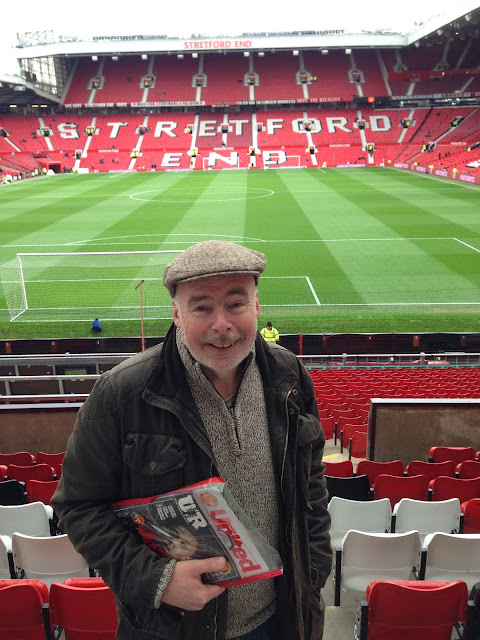