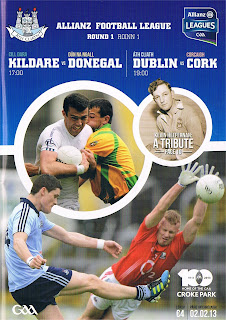 The start of the Allianz National League at Croke Park saw the meeting of league champions Cork play the Dubs. On a very cold evening Croke Park felt quite empty even though the crowd was a respectable 28,000+. Before the game there was a tribute to the late Dublin manager Kevin Heffernan, and to the murdered Garda Adrian Donohue. The match programme also has a nice feature on "Heffo", as well as a short history of Croke Park which is 100 years old this year.

Dublin were never in any real danger of losing this match as Cork were quite poor. They gave up some easy scores and missed a host of easy chances that could have made the game a lot closer than the six point margin at the end. Dublin were certainly worth the victory with good performances from Bernard Brogan, Paddy Andrews, Jack McCaffrey, and Stephen Cluxton. On this form Dublin will take some beating this year, while Cork will have a lot of work to do.

Tickets for this game, and four others in the series, are just €50 - my seats were on the half-way line. At €10 per game this is excellent value and it was a surprise to me that the attendance was not higher - maybe the cold had something to do with it. Next up, Dublin vs Mayo on March 2nd in a repeat of last year's All-Ireland Final.