A Treat at Clarke Railway Station in Dundalk

Today I was in Dundalk Institute of Technology for a short meeting, DkIT is a place I like visiting as it is a wonderful spread out campus with its own giant windmill for generating electricity - some day most institutions will have a similar source of power.

I had planned to make the 160 km round trip on my bike, but due to bad weather I decided to take the train instead. Sleet and cold were forecasted and this would not have been enjoyable on two wheels. I took the 9.35 Belfast train, and it was my first time to travel North in this way. The (almost empty) train was very comfortable and free WiFi allowed me to get a bit of work done. This trip took 50 minutes and it is a pleasant way to travel. 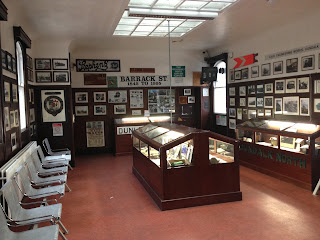 On  the return journey I spotted that there is a small museum in Clarke station. I had been informed that the train would be 1 hour late, so this was a fine opportunity to while away some time. This museum is a little gem and does not take long to see everything. There are plenty of photos of old scenes from the station, old railway engines, and of people who worked there. The oldest photo I saw was from 1903 of the staff at the station - pity to think that everybody in that photo is now dead. There are some railway mementos and stories of lines now closed. Almost all photos are in black and white which lends a historic air to the place.

Outside the museum are two metal plaques containing the full version of the 1916 Easter Proclamation - I honestly don't recall ever having read it in full before. My Mum used to tell me that she had to learn it off by heart in school.

Clarke railway station in Dundalk is a surprising treat!

Email ThisBlogThis!Share to TwitterShare to FacebookShare to Pinterest
Labels: Travel