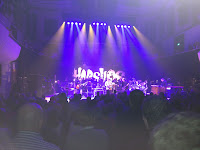 It was 1970s nostalgia, balding heads, expanding waistlines, dyed roots, and for a couple of hours at least, youth restored for the middle aged fans of Horslips who rocked the National Concert Hall last evening. I had been at a previous concert at the O2 back in December 2010 - this time in the more intimate surroundings of the NCH they were supported by The Orchestra of The National Concert Hall, with arrangements by Golden Globe nominee (and conductor) Brian Byrne. It felt like Celtic Rock meets Seán Ó Riada.

The concert was based on two of Horslips' most famous albums - The Táin and The Book of Invasions. This of course meant we were treated to some of their best music: "Charolais", "Dearg Doom", "Daybreak", "Trouble (With a Capital T)", and "The Power and the Glory". At times the Orchestra drowned out the lads, in fact probably the only time that this did not happen was for the second encore when they played "Shakin' All Over" without the orchestra. However, for tracks like "Daybreak" and "Dearg Doom", the orchestra really excelled and helped make the evening special for Horslips fans. It's not the first time Horslips have played with an orchestra - check out "Trouble (With a Capital T)" in the YouTube video below when they hooked up last year with the Ulster Orchestra at the Waterfront in Belfast.

Email ThisBlogThis!Share to TwitterShare to FacebookShare to Pinterest
Labels: Horslips