With a new laptop recently provided for me at work, I have much more flexibility when recording videos. I now have plenty of hard disk space and memory. The quality of the recordings is better, and the videos are created faster. As reported earlier this week I have also switched to Snagit instead of Camstudio. While Camstudio is free, I have in the past encountered some problems with it. For now I am using the one month's trial version of Snagit - so far with no problems. It is just as easy to use as Camstudio, and creates excellent videos that can be uploaded immediately to YouTube. All very integrated.


On Monday my YouTube Channel, Learn with Dr Eugene O'Loughlin, passed the 1.25 million views mark. having become a "views" millionaire earlier this year, I'm not as excited about this landmark as I had been about previous ones - I think the 2 million mark is the next one to get excited about which will be some time next year. 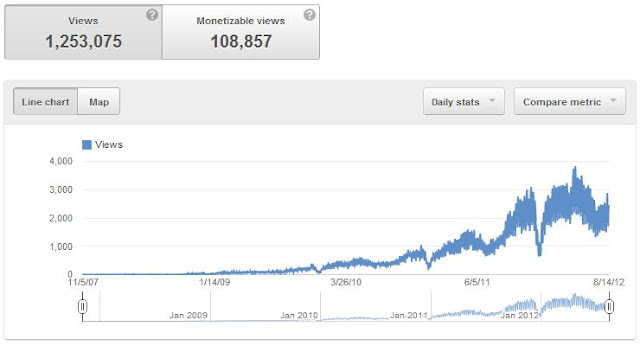 As you can see above, I also have over 100,000 "Monetizable views". Two months ago I switched on monetization to allow ads on my videos. As far as I am aware, part of my Partner agreement with YouTube is that I do not report how much I earn from the channel. Suffice it to say that I will not be retiring anytime soon, but I am surprised that the channel is making a lot more than I thought it would.

I am also interested to see if advertising has a negative impact on the viewing figures. In each of the summers since I started the channel in 2006, viewing numbers have dipped (as you can see above where Christmas/New Year also shows a decline). So far viewing figures have recovered each September, so I'll be watching out for trends this coming September.

As I write, there are now 205 Channel Partners in the Lifelong Learning section of YouTube Education. Mine is still the only Irish one, but as more and more are being added by YouTube I am slipping down the Top 100 Most Viewed - today I am at #99, about 160,000 ahead of Stage Time TV in position #100. But it can only be a matter of time before I fall out of the Top 100. Until recently, I was ahead of additions to the Lifelong Learning network like the much publicized Udacity (now almost 1,300,000 views), who have now passed me out. Udacity has money behind it, and over 3,000 videos - I have no money behind my 73 video channel. Hopefully with plans to create some more videos in the next few weeks for a Statistics module I am teaching, I can improve on this.