Almost five years ago I wrote in this blog about searching for the grave of my grand-uncle Charlie (known as "The Mons" in our family) in the nearby Deansgrange Cemetery. I was not able to find his grave, and the office at the cemetery did everything they could to find his grave. The only piece of intelligence, from the Newman University Church, that I had was that he had died in 1980.


It turns out that the date was way off. I found his name this morning on the Ireland Genealogy Projects Archives website where he is listed as being buried in "St. Patrick's Section, Part Six, No. 765". The date of death was given as 16th January, 1985. With this new intelligence I set off to Deansgrange to try again to find his grave.


While the St Patrick's section is easy to find, "Part Six, No. 765" was not. One of the cemetery workers offered to help, but the number 765 meant nothing to him and he recommended to try the Office. 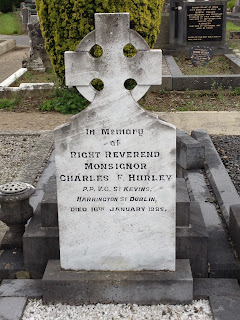 In the office, a very helpful man looked up the records for 16th January 1985, and found Charlie's name in seconds - he is buried in plot 25 B in St Patrick's. Gravestones are numbered on the back. I was able to find his grave, which was beside those of other priests from the diocese. It was in quite good condition. The "F" in his name is for "Francis", I am also named Francis as a middle name after him. The "P.P." stands for Parish Priest, while the "V.G." stands for Vicar General. Though the headstone just lists his last parish in Harrington Street, he was also P.P. in Ballybrack (where me married my mother and father). I'm told that he also spent time in Rome and was even considered for a promotion to a Bishop.

It was nice to finally find his grave - I'm guessing that he has not had many visitors over the past few years. I remember him well and have fond memories of him. My grandmother (his sister) was very fond of him and I can recall many times the fuss over his visits to her house when he was treated like royalty.

Email ThisBlogThis!Share to TwitterShare to FacebookShare to Pinterest
Labels: Family